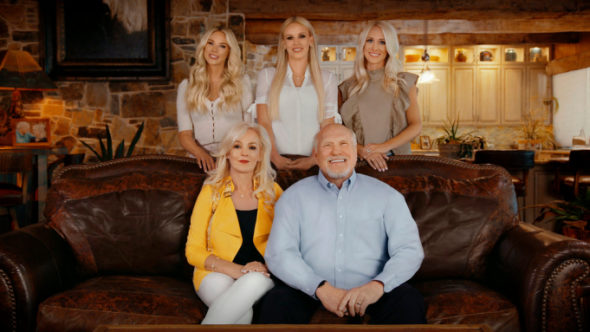 The Bradshaw Bunch is returning to E! this fall. Season two of the reality series will land on the cable network in October but viewers can see a sneak peek for the new season next week, on August 11th.

E! revealed more about the upcoming second season in a press release.

While Terry is embracing being home in the off-season, his daughters Rachel, Erin and Lacey are busier than ever. Terry’s eldest daughter Rachel is laser focused on her new musical melodies and broadening her career horizons. With a little push from her dad, Rachel has fallen back in love with singing and has a monumental performance with Terry at the Grand Ole Opry – country music’s biggest stage. Erin and her husband Scott explore expanding their family, but Terry can’t help himself from coaching them through all aspects of life from how to get pregnant to being first time parents. While Lacey and Noah’s plans to move to Texas were uprooted last year, they now have the best of both worlds, as they split their time between Hawaii and Texas. Terry loves being a “Pappy” and will do anything to have his grandchildren, eight-year-old, Zurie and four-year-old, Jeb, nearby. He is also co-signing Zurie’s dreams of being a slime-making entrepreneur. Between a rematch for a win on Celebrity Family Feud, vow renewal in Hawaii and a road trip to return to Terry’s hometown of Shreveport, LA to walk on the high school football field – where it all started, there is no shortage of love, laughter and chaos amongst this tight-knit family.

The Bradshaw Bunch wrapped its freshman season averaging across all platforms 2 million total viewers, making it the most-watched new series on the network among total viewers in four years (since “Rob & Chyna” in 2016) and the highest-rated new series among P18-49 in over two years (since “Very Cavallari” in 2018), according to Nielsen.

Catch-up on season one of The Bradshaw Bunch streaming now on Peacock.

Check out the preview for The Bradshaw Bunch season two below.

What do you think? Are you a fan of The Bradshaw Bunch? Do you plan to watch season two on E!?

I enjoy this reality series very much. Terry Bradshaw is great and so funny.