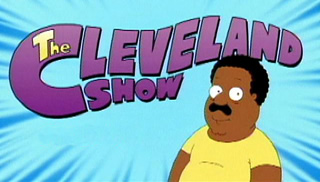 The FOX network is understandably very happy with their new Family Guy spin-off, The Cleveland Show. They’ve rewarded it with a very early pick-up.

When the show premiered on September 27th, FOX had already been treating it like a hit. The show was given a greenlight and a 13 episode order in May 2008. Needing ample time to produce the animation, Cleveland was expected to debut by mid-season 2008-09.

In November 2008, FOX ordered additional nine episodes, bringing the first season total to 22. Character Cleveland Brown said in a FOX-released statement, “FOX picking up nine more episodes of our show is proof that an African-American can make it in this country. This is a milestone for the United States of America.”

Later, based on the strength of what they’d seen, FOX decided to delay Cleveland’s premiere and give it a big launch in Fall 2009. They had such faith that they renewed it for a second year in May, several months before its scheduled premiere.

Now that the debut numbers are in, their faith has been rewarded. The show is a hit and, as a result, FOX has ordered nine additional episodes for season two. This time, Cleveland said, “While I’m excited about this news, I really can’t wait until next Wednesday to see an all-new Glee.”

So, while some new shows are still hoping to get through their first season, fans of The Cleveland Show can rest easy. They’ll be seeing new episodes of Cleveland for a long time to come.

What do you think? Is Cleveland worth watching?

Bat,
You can’t even spell Cleveland. And you just described why these shows are so friggin funny. You’re on an Island my man..or woman.. or Chipmunk I guess

It’s brilliant! Family Guy and Cleveland Show have the same sense of humour but they are different shows.

We love it in the UK!

this show is just a clone of Family Guy, I only watched 10 minutes of the first episode and knew then it was crap. Seth needs to devote a little more time to Family Guy to bring it back to it’s former greatness, he’s been so busy with the 3 cartoons that Family Guy has become repetitive and predictable. the Cleavland Show is even worse, same lame gags minus the giant chicken and talking dog (oh wait they replaced him with a bear)