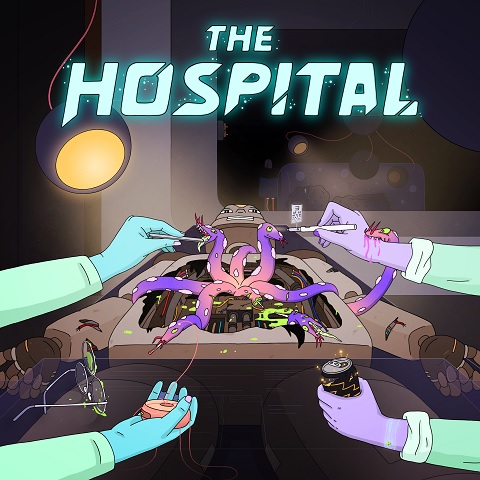 The series follows daring alien surgeons (and inseparable best friends) Sleech (Lee) and Klak (Palmer) as they take on the most challenging cases in the galaxy. Amazon revealed more about the new series in a press release.

“Amazon Studios today announced that it has ordered two seasons of The Hospital, a new sci-fi animated comedy created by Cirocco Dunlap and executive produced by Maya Rudolph, Natasha Lyonne, and Danielle Renfrew Behrens through Animal Pictures. Shauna McGarry will also executive produce. Keke Palmer, Greta Lee, Kieran Culkin, Sam Smith, Rudolph and Lyonne will voice aliens in the series with more voice cast to be announced. The Hospital will premiere exclusively on Prime Video in more than 240 countries and territories worldwide.

The Hospital is a completely original concept that follows Sleech and Klak – aliens, best friends, and intergalactically renowned surgeons – as they tackle anxiety-eating parasites, illegal time loops, and deep-space STIs. Risking their careers to take on a remarkable case, they put existence itself in jeopardy. Although considering their dismal personal lives, oblivion might be an improvement.

Keke Palmer (Alice, Hustlers, Nope) will voice-star as Dr. Klak, a brilliant, multi-eyed surgeon who spends her down time feeding her sentient plants, obsessively reviewing past failures, and watching hit show My Lover, My Clone with her best friend Dr. Sleech.

Greta Lee (Past Lives, The Morning Show) will voice-star as Dr. Sleech, a reckless, cocky surgeon whose main saving graces are her genius, her well-oiled lizard tail, and her unconditional love for her best friend Dr. Klak.

Natasha Lyonne (Russian Doll, DC League of Super-Pets) will voice-star as Nurse Tup, a playful nihilist with chameleon flesh who thrives in the chaos of the Hospital. Nurse Tup expertly navigates every accidental apocalypse created by renegade doctors Sleech and Klak, and looks good doing it.

Maya Rudolph (Saturday Night Live, Big Mouth) will voice-star as Dr. Vlam, a robot intern who has been alive for at least 20,000 years. She’s had every career you can think of – king, thief, stay-at-home mom of 500 – and is a true testament to hard work. All you need to succeed is roughly 850 years of free time.

Kieran Culkin (Succession) will voice-star as Dr. Plowp, a surgeon, an empath, and an adult experiencing puberty. He has a love-hate relationship with Sleech, constantly feels everyone’s feelings, and has four identical brothers with whom he shared an egg.

“Working with Animal Pictures, Amazon Studios, and Titmouse to create a show that prominently features unsexy alien sex has been one of the best experiences of my life,” said Dunlap.

“Cirocco is a total original. Brilliant and wildly talented with an utterly singular voice and boundless imagination,” said Rudolph, Lyonne and Renfrew Behrens of Animal Pictures. “She’s also ridiculously funny and finds the most unexpected ways to make you laugh while exploring complex existential questions! It has been a thrill to watch her nurture the seed of an idea and grow it into two seasons so beautifully.”

“The Hospital is the perfect example of the fresh and unique programming we get so excited to deliver to our global Prime Video customers,” said Vernon Sanders, head of global television at Amazon Studios. “Cirocco’s humor and clever characters will entertain in any galaxy. We are thrilled to have this special project join our growing adult animated slate.”

Prior to developing The Hospital, Dunlap’s credits include Russian Doll, Baymax!, Big Mouth, and Man Seeking Woman. Dunlap’s short film Everything Is Okay screened at South by Southwest in 2018.

Eisenberg is a Los Angeles-based artist who has amassed a large following online for her depictions of aliens doing relatable things. She has created art and collaborated with clients such as Vans, Adobe, Apple, Thrasher, and Adult Swim.”

What do you think? Are you planning to check out The Hospital when it eventually premieres?