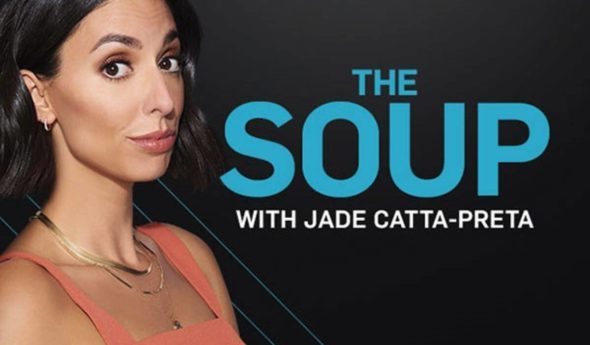 Get ready for a brand new season of The Soup! E! has announced the premiere of the series with a preview, and fans of the long running series, which began as Talk Soup, are in for some fun! Jade Catta-Preta serves as host of this revival, and the series will return next month.

E! revealed more about the return of The Soup in a press release. Check that out below.

The Soup will feature Catta-Preta’s unfiltered take on the buzziest clips of the week across entertainment and social media. Through clip highlights and recurring segments, the series will cover hilarious moments across TV and entertainment, including the latest competition series, daytime and late night talk shows, reality favorites like The Real Housewives and The Bachelor, award shows, popular scripted series, sports programming, and everything in between. In the latest iteration of the legendary E! franchise, “souper” fan Catta-Preta will keep viewers up-to-date on pop culture highlights through her sharp observations and hilarious point-of-view.

“I am excited beyond words for The Soup ‘It’s a total dream to host a show I’ve always been a fan of.” said Catta-Preta. “Only one more thing on my bucket list… become the 6th Spice Girl… Gazpacho Spice. Fingers crossed.”

Jade Catta-Preta is a Brazilian-born comic and actress working in Los Angeles, New York and Brazil. She performs at comedy clubs all over the country both in English and Portuguese. Her credits include MTV’s Girl Code and Punk’d, Comedy Central’s @Midnight and guest roles on Modern Family and The Jim Gaffigan Show.

Check out the trailer for the new season of The Soup below.

What do you think? Were you a fan of the original Talk Soup? Will you watch the revival of the series?

The Soup will always be Hal & Joel for me.
It may be unfair but after 2 weeks I’m deleting it from my DVR.

Why didn’t they bring back the original guy who hosted the Soup. I really liked him.