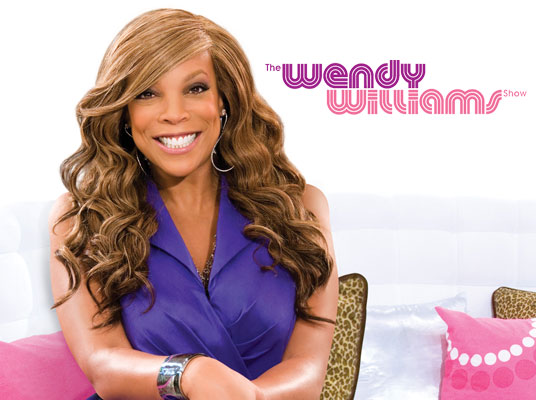 Wendy Williams will keep on talking via her syndicated show. The Wendy Williams Show has been renewed through its eighth season for the 2016-17 season.

“The Wendy Williams Show has as much momentum as any show on our air right now, both qualitatively and quantitatively,” said Frank Cicha, senior VP of programming for the FOX Television Stations. “Over the last few years, it’s evolved into the ideal lead-out to our morning news blocks. Like our news, the show delivers a day/date immediacy that serves as a blueprint for where we want to be the rest of the day.”

The multi-season FOX commitment, which comes on the heels of a previous two-year deal, follows a strong May metered market sweeps performance for Wendy. Airing at 10 a.m. on FOX’s WNYW New York, Wendy doubled in rating year-to-year in the key daytime demo of women 25-54 on WNYW New York (1.2 rating/9 share to 2.4/16). Additionally, it rose 58% on FOX’s KTTV Los Angeles airing at 11 a.m. and 139% on FOX’s WFLD Chicago at 10 a.m.

Wendy also was the only talk show in all of syndication to post year-to-year growth, leaping 43% to reach a 1.2/8 in the demo.

Bernstein and Marcus commented, “FOX’s long-term renewal is a testament to the incredible growth the show has experienced this season and the amazing talent of Wendy. Our broadcast partners across the country have taken notice, demonstrating their faith in the staying power of this rapidly growing talk franchise with upgrades. We are particularly gratified that many of those are among the news leaders in their markets and see Wendy as the ideal lead out for their morning newscasts.”

The leap in both local and national ratings for the talk show from the Lionsgate-owned producer-distributor started with the most recent expansion in mid-December of the Wendy fan-favorite “Hot Topics” segment. Debmar-Mercury has ordered more original episodes of the show for the summer.

Williams will star as Matron Mama Morton in the Broadway hit “Chicago” for seven weeks beginning June 25 and her sixth book, titled “Ask Wendy (William Morrow),” went on sale May 7 and is based on her popular, recurring advice segment. She also recently formed Wendy Williams Productions, which will produce reality, game and talk shows.

What do you think? Are you a regular viewer of The Wendy Williams Show? Are you glad to hear that it’s staying on the air?

I am so tired of all the summer reruns????? Why is it has be off so much and why can’t she allow a fill in so that the show goes on without her? It gets old that for nearly a month and all of the holidays are reruns and they are on for so long. Also, the hot topics becomeold news and the show is not fresh any longer..it’s like Wendy doesn’t care anymore , but she won’t take a chance on a fill in to keep the show up to date, it’s ridiculous!!! She is losing me as a… Read more »

Where is wendy. She’s not on in cincinnati anymore.

I think it is unfortunate that talk shows with no real substance such as The Wendy Williams show gets renewed for another season.

How come my favorite show (Wendy) wasen’t on at 1pm in Portland today?

I love the Wendy Williams show, however I would like to hear more about her personal life since she does comment on other peoples personal affairs. I have been looking for her show to start in September to my surprise I can’t find a new show anywhere. Has Wendy actually been cancelled? Oh No! I hope not! Please let us know she is suppose to eat crow I am looking forward to seeing that!! Whats Up!!

I like hot topics, & she is stuck on herself. why don’t she look like her parents, is she adopted, where is her husband while she talks about everyonelses. mixed feelings on her show,can take it or leave it

Wendy is so down to earth and anyone can count on her being a “For Real” real person. I goggle to see if her show was cancelled. I saw so many options; some even stating that the show will air again 2016-2017. How about for the current season–like this year to 2015!! We need show to stay on indefinitely! YOU GO WENDY!!!

She is so down to earth and I love that the audience members are her co-hosts. I like the fact that she’s not always politically correct, everyone is so scared to voice their opinions these days. I’m going to continue to watch Wendy.

THE WENDY WILLIAMS SHOW SHOULD BE CANCELLED.THAT WOMAN IS SO SCANDALOUS.SHE MAKES RIDICULOUS PREDICTIONS AND NEVER APOLOGISE WHEN THING GO THE OTHER WAY.SHE DOES NOT KNOW PROPER ENGLISH.SHE MAKES UP WORD LIKE SCRUTINISATION FOR SCRUTINY.SHE HAS SO MUCH NEGATIVITY FOREVERYBODY.WHO IS SHE?SHE LOOKS SO MUCH LIKE ADRAG QUEEN WITH HER FAKE BOOBS , BODY AND HAIR WHCH SHE SWINGS AROUND LIKE IT IS REAL.HER VOICE SOUNDS LIKE A MAN’S SOMETIMES.SHE CAN’T EVEN READ.IMAGINE HER CRITISIZING REHANNA BOOBS.THEY ARE REAL BY THE WAY.

Can’t take negative comments? The show should be cancelled.

She should be cancelled permanently. She is stuck on herself and thinks she is the all knowing.

Its nice to know that Wendy “how you doing” Williams will be around for our viewing pleasure for the next 3 years. ALLRIGHT!!!

One thing about Wendy that bothers me is she will never let us live down the DWTS ok you lost get over it! She brags about the show so much then give thanks for being off the show which is it? I guess the complaints is something to hide behind the embarrassment after the second show. Lastly don’t get to big for your brithes young lady you can fall to remember your husband?

I watch the show only for the hot topics then I turn it. I really think Wendy is beginning to smell herself a bit.

yes happy to hear as I really like the show. However, I thought she was going to be on thru the summer months?? what happened all i see are reruns..