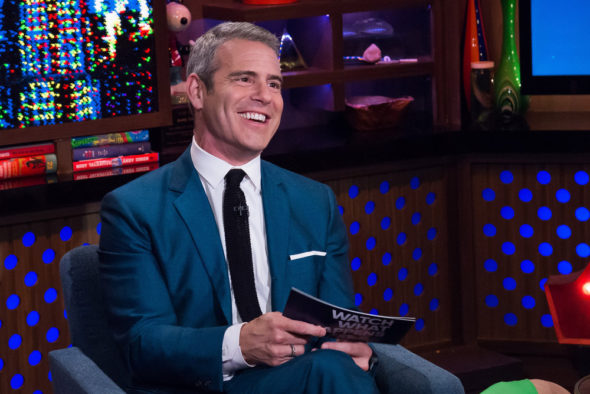 Bravo‘s new, three-part limited series, Then and Now with Andy Cohen, premieres Sunday, December 13, 2015 at 10:00pm ET/PT. Cohen and his guests will revisit moments of three notable years: 1989, 1994, and 2000. The panel will discuss trends and events that shaped a given year and analyze how the past has influenced the present.

BRAVO MEDIA TURNS BACK TIME WITH A NEW THREE-PART LIMITED SERIES “THEN AND NOW WITH ANDY COHEN,” PREMIERING SUNDAY, DECEMBER 13 AT 10PM ET/PT

NEW YORK – October 27, 2015 – Bravo Media takes a trip down memory lane with a new, three-part limited series, “Then and Now with Andy Cohen,” premiering Sunday, December 13 at 10pm ET/PT, where host and Executive Producer Andy Cohen explores the nostalgic moments of three significant years in history – 1989, 1994 and 2000. In each episode, Cohen, alongside his newsmaker, writer and celebrity guests, focuses on the most influential trends and events that shaped that year and reveal how the past has impacted the cultural nuances of today in unexpected ways. From musical sensations to political movements, court room scandals to Y2K, and the power reality TV has had on fashion, food and more, Cohen gets never-before-heard insider stories from his guests who have had a front row seat to era-defining pop culture cornerstones. Additional prominent figures featured include former White House Social Secretary, Jeremy Bernard; Major Jeff Mueller; Director Justin Simien and LGBT journalist Zoey Tur. As a former news producer and current expert of today’s pop culture zeitgeist, Cohen brings first-hand experience for many of the key events featured in these episodes. “Then and Now with Andy Cohen” is produced by World of Wonder and Cohen’s Most Talkative Productions. This marks the first series to come out of Cohen’s first-look development deal with Bravo and his production company. For a sneak peek, go to: http://www.bravotv.com/watch-what-happens-live/season-12/videos/heres-your-first-look-at-then-now

The first episode of the limited series, premiering Sunday, December 13 at 10pm ET/PT, relives the pivotal moments of 1994, including OJ Simpson and the most publicized criminal trial of the century, the launch of Amazon.com and the cultural obsession with the NBC sitcom, “Friends.” Cohen delves into the “Don’t Ask, Don’t Tell” LGBT rights movement and how Kurt Cobain’s death affected a generation, among other key events throughout this year.

Part two, airing on Wednesday, December 16 at 9pm ET/PT, will focus on how 1989 started a revolution – from the birth of Botox to the racial tensions depicted in “Do The Right Thing” – that lives on. Cohen and his celebrity guests will discuss the exercise craze of the year, step aerobics, that paved the way for the thigh master, shake weight, spinning, and boot camps of today, the impact of AIDS on the art community, and how “House of Style” brought high fashion to mainstream.

The third and final part of the series, airing Wednesday, December 23 at 9pm ET/PT, explores the turn of the Century with the .com bubble burst, Y2K, and how Jennifer Lopez is the reason for Google’s “Image Search.” Competition was trending in 2000 with the emergence of culture phenomena “Big Brother,” and “Survivor,” and Cohen and his guests will discuss the significance of picking Carrie, Samantha, Charlotte or Miranda as a fan favorite, and how it impacted today’s television landscape.

For more information about the show, please visit: http://www.bravotv.com/the-daily-dish/andy-cohen-then-and-now-new-series. In addition, fans can check out Bravo’s Facebook page and join the conversation on Bravo or Andy’s Twitter using the hashtag #ThenandNow.

What do you think? Do you like the sound of Bravo’s new TV show, Then and Now with Andy Cohen? Do you plan to check it out?