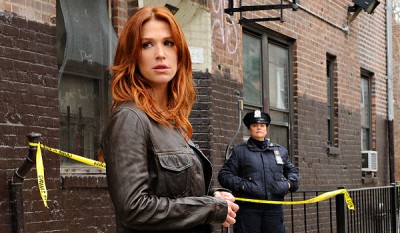 It turns out that Unforgettable didn’t live up to its name. CBS has cancelled the police drama after one season on the air.

Unforgettable started out the season with a 2.9 rating in the 18-49 demographic with 14.09 million total viewers. Over the course of the season, the drama’s ratings declined. At the end of the season, they fell as low as a 1.8 demo rating with 9.45 million viewers.

The season ended up averaging a 2.3 rating in the demo with 11.3 million viewers. While the total number of viewers is impressive, the demo number (and its decline) is not. CBS already has several other shows that deliver lots of viewers but the advertisers gravitate towards the younger demo.

On our CBS Ratings Report Card, which measures the relative success of shows on the network, Unforgettable has a “C-” grade and is #15 on the list of CBS scripted shows.

If CBS wasn’t doing as well as they are, Unforgettable might have been renewed for a second season but, as it is, CBS cancelled the show instead.

What do you think? Are you going to miss Unforgettable? What made it unique? How does it compare to the other crime dramas on the network?

I throughly enjoyed this show. Poppy Montgomery portrays a believable and endearing character, who displays interesting insight and amazing determination. This is a totally new concept and it’s originality is intriguing. Not unlike A Person of Interest, which is an amazing series, CBS should consider that people are tired of the usual cop shows like the CSI group!
Please reconsider canceling this show as many people will really miss it!

Man I agree with those above. You take off good shows And leave reality shows on. COme on how many do you need. This is an entertaining show and Poppy Montgomery is excellent. Another one of my favorite shows taken off. Just who judges these shows anyway. All you have on there is not worth watching. Smut to put it bluntly. Then when you do have a good show you start Adding the sexual scenes. Good grief leave something to the imagination for our children. What poppy has is a true life gift.

I’m so upset I have to post again. Sorry but did the people who don’t think 10 or 11 million viewers aren’t nough remember that this is an election year and on a few of those Tuesday nights there were debates and elections. Also breaking political news that could have pulled off viewers? Give the show a chance. Remember it was the fans that kept Cagney and Lacey alive for years when the peo at the top wanted to cancel it. It became a hit. But no – they choose Two and a half men (never watched such an idiot… Read more »

Why do they keep doing this to good shows. I’m losing faith in these networks, it’s getting to the point where if it isn’t total smut or cheap garbage then it’s not ready for television. This is ridiculous, stop cancelling good television shows. Also I’m tired of networks and advertisers judging shows based on the demographics, if it gets good views that should be enough. I realize they want money but that’s no reason to take out shows with such vivid content to them.

You know what I think? I think CBS managers are all stupid. See, they have no sense. If they did, they would know to keep Unforgettable and cancel some stupid reality shows. CBS just lost a viewer, and if they get any dumber, which I’m sure it’s possible, I’m 99.9% positive they’ll lose more. 🙁 Screw it. I loved Unforgettable, and now I guess I can forget it. So you know what? You can forget CBS too.

Stupid peo make stupid decisions for stupid viewers.
Unforgettable had talent, intrigue, depth – like Hitchcock – all the elements of mystery and an intelligence. I guess reality nitwits rule. Sad day for tv – are we getting more stupid by the minute?!
Is there any hope that they will reconsider.
Loved the characters – real people – Carrie’s condition is real – neuroscience has proven it – it’s fascinating. I have no words at this point for the morons who made this decision.
I’m speechless and disappointed. Buh bye CBS – run your junk. I’m gone.

This is unforgivable. They keep stupid crap and cancel something intelligent and
fascinating. Will they reconsider?

This was one of my favorite shows I can’t believe they just cancel it although they did cancel csi Miami and I would have never seen that comming Cbs is just horrible they’re becoming as bad as nbc.

I loved Unforgettable. It was fast paced – had great story plus interesting and intelligent characters. I found it a compelling drama. Will they reconsider?

This was one of the only shows I taped this season so I wouldn’t miss any episodes. It was unique and I thought the casting was great! So sorry to see it go considering all the “junk” that’s on TV now.

I had hopes for this show, but Carrie’s memory was a “one-schtick pony” that would use the same gimmick each time (those annoying “searching her memory” sequences). While I grew to like most of the cast, the stories were nothing remarkable, especially when one looked past Carrie’s talent. I’m not surprised it was canceled.

I’ve never seen this show, but 11million viewers during an episode of anything shouldn’t be considered “low”. The CW wishes they could get have that amount of people to watch their crap.

You see, people don’t like originality, they never had a show where someone could remember everything, so they canceled it, WTFE!!!! cbs just went down a few points in my book.

I agree they cancelled csi miami too after 10 seasons.Go figure.