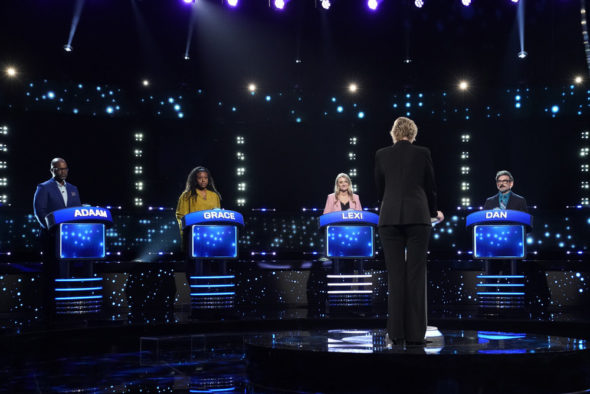 How insulting can Jane Lynch get? Has the Weakest Link TV show been cancelled or renewed for a third season on NBC? The television vulture is watching all the latest cancellation and renewal news, so this page is the place to track the status of Weakest Link, season three. Bookmark it, or subscribe for the latest updates. Remember, the television vulture is watching your shows. Are you?

Airing on the NBC television network, the Weakest Link TV series pits contestants against one another while also forcing them to work together in a trivia contest. In each episode, eight contestants enter the studio as total strangers but must work together to bank the maximum amount of prize money available in each round. At the end of each round, contestants vote to eliminate the fellow contestant they consider to be the “Weakest Link” in the chain. The contestant who receives the highest number of votes leaves the game as host Jane Lynch utters the iconic phrase, “You are the Weakest Link. Goodbye.” By the end of the episode, a single player can win up to $1,000,000.

The second season of Weakest Link averages a 0.24 rating in the 18-49 demographic and 1.59 million viewers in the live+same day ratings (includes all DVR playback through 3:00 AM). Compared to season one, that’s down by 63% in the demo and down by 57% in viewership. While these numbers don’t include further delayed or streaming viewing, they are a very good indicator of how a show is performing, especially when compared to others on the same channel. Though other economic factors are involved, the higher-rated shows usually get renewed and the lower-rated ones get cancelled. Find out how Weakest Link stacks up against other NBC TV shows.

Will NBC cancel or renew Weakest Link for season three? This series appears relatively inexpensive to produce and can be used to fill in spaces in the schedule as needed. For practical reasons, I think it has a very good chance of being renewed. I’ll update this page with breaking developments. Subscribe for free alerts on Weakest Link cancellation or renewal news.

What do you think? Do you hope that the Weakest Link TV show will be renewed for a third season? How would you feel if NBC cancelled this TV series, instead?