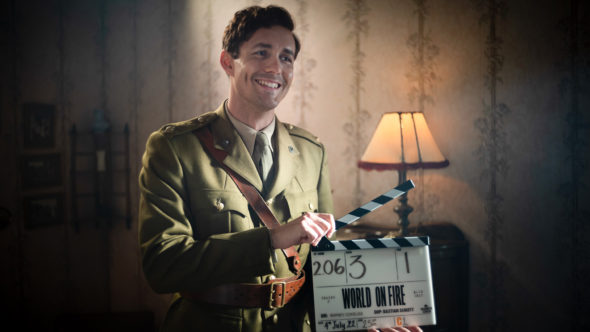 Season two of World on Fire is getting closer. The British war drama series debuted in the UK in 2019 and was shown in the US in 2020. The show was renewed for a second season in 2019 but, due to the pandemic, the drama’s return was delayed. Production on season two of the PBS Masterpiece series is now underway in Northern Ireland.

PBS revealed more about the second season of World on Fire in a press release.

“Filming has begun on the return of the MASTERPIECE and BBC hit drama World on Fire. Telling the story of World War II through the eyes of ordinary people whose lives have been thrown into chaos, the six new episodes are written by series creator Peter Bowker, Rachel Bennette and Matt Jones, and made by Mammoth Screen for the BBC and MASTERPIECE.

October 1940. Lone pilots are sent to destroy German bombers prowling the skies above Manchester as the Northern Blitz begins. The true reality of war has arrived in Britain.

World on Fire Season 2 will take viewers from the streets of Britain into occupied France, Nazi Germany, and to the sands of the North African desert, where British troops struggle alongside Indian Sappers and Australian Diggers to adapt to a very different kind of combat.

Returning cast include Lesley Manville as Robina, Jonah Hauer-King as Harry, Julia Brown as Lois, and Zofia Wichlacz as Kasia, with Blake Harrison as Stan, Eugénie Derouand as Henriette, Eryk Biedunkiewicz as Jan, and Cel Spellman as Joe.

World on Fire creator and writer Peter Bowker says: “The second season of World on Fire has been a long wait due to a certain pandemic and this makes the beginning of filming especially exciting. It has been a real joy to pick up the story with our inspirational cast, both our established regulars and new and exciting talent who have embraced the show’s scale and ambition. How the conflict played out in North Africa is a fascinating and little explored history and we are aiming to redress that balance with stories of struggle and friendship. Our diverse cast will continue to reflect the global nature of the conflict.”

Helen Ziegler, Director of Television at Mammoth Screen, says: “Peter Bowker gives us an extraordinary insight into the second year of World War II with his unique humanity, humour and pathos. This is a drama which poses the question – how do you survive when everything around you has changed unimaginably? We are absolutely thrilled to be returning for this epic and adrenalized Season 2 of World on Fire, with our wonderful returning cast joined by a host of new characters!”

Ben Irving, Acting Director of BBC Drama, says: “With a range of intriguing, untold stories that put ordinary people at the centre of history, and a first-rate ensemble of both new and returning characters, it’s a real pleasure to see filming on World on Fire Season 2, now underway.”

MASTERPIECE Executive Producer Susanne Simpson says: “World on Fire captivated our MASTERPIECE audience and we’re thrilled to bring them another season of this ambitious World War II drama. With Peter Bowker’s riveting scripts, a talented returning cast plus some intriguing new characters, Season 2 will definitely be worth the wait.” MASTERPIECE is presented on PBS by GBH Boston.

Commissioned by the BBC, World on Fire is produced by Mammoth Screen and co-produced with MASTERPIECE for the BBC, in association with ITV Studios. It is created and written by Peter Bowker, written by Rachel Bennette and Matt Jones, produced by Amanda Black and Angie Daniell and directed by Drew Casson, Barney Cokeliss and Meenu Gaur. Executive Producers are Peter Bowker, Sheena Bucktowonsing, Damien Timmer and Helen Ziegler for Mammoth Screen, Lucy Richer for the BBC, and Susanne Simpson and Rebecca Eaton for MASTERPIECE. Mammoth Screen is an ITV Studios company.”

A premiere date for the six-episode season will be announced later.

What do you think? Are you excited to see the return of World on Fire on PBS?