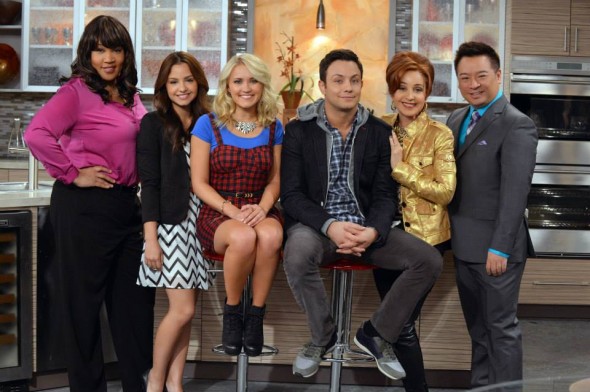 Gabi is desperate to be hired as Josh’s personal chef but must prove herself — mostly to Josh’s publicist and right-hand-man, Elliot Park (Rex Lee). He wants a famous chef for the job and makes no secret of his disdain for Gabi.

Josh enlists Gabi to prepare a romantic meal for him and his girlfriend Caroline (Mallory Jansen). The dinner goes awry and Gabi and Josh find themselves closer than they anticipated.

With the help of her best friend/roommate Sofia Rodriguez (Aimee Carrero) and Josh’s blunt housekeeper Yolanda (Kym Whitley), Gabi turns a difficult situation into an opportunity for employment and maybe even love.

Series Finale:
Episode #71 — Young & Yacht’in
Josh takes the gang for a getaway on his new yacht, where Gabi hits it off with the yacht’s chef (Alex Guarnaschelli – playing herself). When Alex offers Gabi an amazing opportunity, it ruins Josh’s plans. Meanwhile, Sofia has a terrible misunderstanding about her boyfriend and Elliot and Alan meet a flirty steward.
First aired: July 25, 2018.
What do you think? Do you like the Young & Hungry TV series? Should it have been cancelled or renewed for season six on Freeform?

Please do not cancel this show. There is not very many tv shows that I watch. I set my DVR for this show

Me too I love this show

I love this show, as does my husband, please do not cancel young and hungry

I just love this show and it should be renewed.

I love this show. It’s so funny and unique. It has great actors and should be renewed for another season.

The show is amazing, i cant help watching after few minutes of first episode. Renew pls

I love Gabi and Josh….I love the show

Love this show it just keeps getting better and better..!