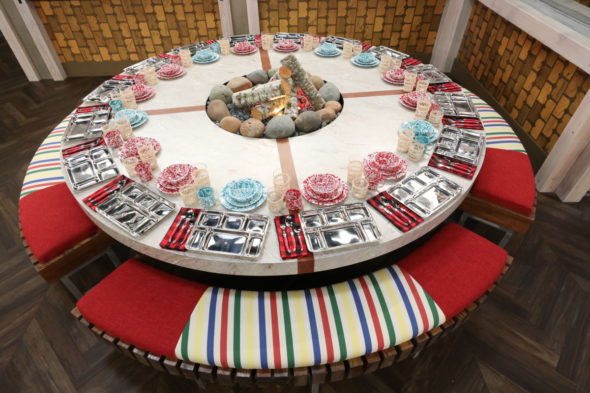 Is it eviction time? Has the Big Brother TV show been cancelled or renewed for a 22nd season on CBS? The television vulture is watching all the latest TV cancellation and renewal news, so this page is the place to track the status of Big Brother, season 22. Bookmark it, or subscribe for the latest updates. Remember, the television vulture is watching your shows. Are you?

A CBS competitive reality TV series, hosted by Julie Chen Moonves, Big Brother typically airs three nights a week — Wednesdays (veto), Thursdays (eviction), and Sundays. In the 21st season, the new contestants are: Holly Allen, David Alexander, Nicole Anthony, Tommy Bracco, Kathryn Dunn, Kemi Faknule, and Cliff Hogg III. Big Brother follows a group of people living together in a house outfitted with 94 HD cameras and 113 microphones, recording their every move 24 hours a day. Each week someone is voted out of the house. The last remaining Houseguest wins the grand prize of $500,000.

The Thursday editions averaged a 1.06 in the demo with 4.10 million viewers. Compared to Thursday episodes from season 20, that’s down by 29% and 23%, respectively.

The Sunday editions averaged a 1.12 in the demo with 4.45 million viewers. Compared to Sunday episodes from season 20, that’s down by 24% and 18%, respectively.

Find out how Big Brother stacks up against the other CBS TV shows.

Will CBS cancel or renew Big Brother for season 22? Despite falling ratings over the years, it is still one of the best rated summer series on CBS. So, barring catastrophe, Big Brother will not be cancelled. Still, I’ll keep an eye on the Nielsens and update this page, as more ratings dating rolls in. Subscribe for free Big Brother cancellation or renewal alerts.

What do you think? Should the Big Brother TV series have been renewed for season 22? How would you feel if this CBS TV show had been cancelled, instead?

Please start bb20 !!been waiting since it went off last year’!! Luv it

Please bring back Big Brother. I am so bored.

Once hg s are safe enter house only need outside employees old to protect house guesrs! Can be done easily!! To keep all safe love you we need bbc.co to cheer us up! Don’t even have wait until June most all out of work or school anyway!

Bbc.co BY can start now can give us lifted spirits now show hope with covid19 can quarantine before go in house masks for close contact but if isolated before show masks shouldn’t be necc. No diff. Then families quarantined together bbc.co needs to happen!!

Pop culture should get the info first. It said at midnight two days ago it cancelled, than at noon the same day say it going on as planned. I just saw it now so they were side by side.

Big brother Canada fans needs to stop giving Jamar money. They kicked Jamar off for saying to Kyle “you’re going to get pop outside this house”. And Kyle said ” I can snap him to in 57 pieces”. They give Jamar $5,130 because they both made theaths but he made his first so they only kicked him off. Now that they kicked Kyle off too they should stop giving Jamar money he needs to be treated fairly was his point both are kicked out so he only deciver the cash he reached at that point. The $5,130

Please don’t cancel Big Brother because this is the best show ever!! Me and my family be waiting every summer and every winter for celebrity big brother. This the only time I watch television. It’s very entertaining, fun and full of laughter.

They should make better casting decisions. The last season that I really enjoyed was Shelby, Morgan and crew. Each season the cast gets worse.

Big Brother producers find the most loathsome people on in the US to appear on this show. It’s not a game. It’s psychosis out of control

I wish that they would have more older contestants instead of one.

They need some more mature players that can think strategically instead of showmances and people who know each other. This has been the worst season.

Who is still watching this mess?

Me this is not a fight just saying i do-

Yes the show should be renewed. CBS has made a grave mistake by putting it on Sunday evenings since this evening is 99.99% of the time, time shifted by sports events. Having a DVR and recording the next hour is helpful. Please switch Big Brother back to its traditional nights, unless you (CBS) are trying to kill it as well as piss off the audience it has always had