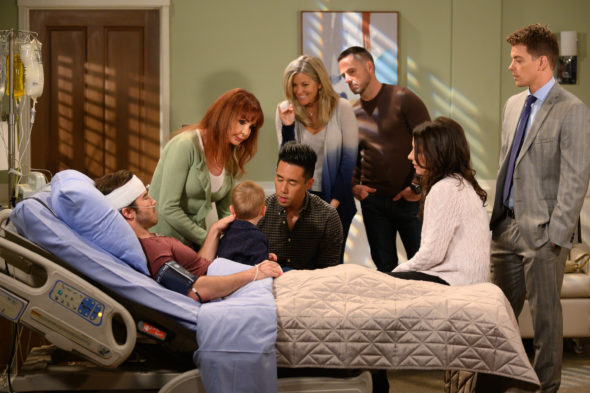 The longest-running soap opera currently on American television is returning — stat! ABC has revealed that its General Hospital TV series will soon be returning with original episodes.

Like other TV series, production on General Hospital shut down in March due to the COVID-19 pandemic. Though the cast and crew had shot many weeks of episodes in advance, the network began airing repeats once a week as “Flashback Fridays” along with four new installments, in an effort to stretch out the original content. New episodes ran out on May 21st.

Members of the cast and crew resumed shooting yesterday and ABC has announced that new episodes will begin airing on Monday, August 3rd. Here are some teasers for what fans can expect to see in General Hospital’s first week back.

TUESDAY, AUGUST 4
Carly comes home to a distraught Sonny. Valentin and Martin strategize. Brook Lynn interrupts Ned. Monica is committed to a cause. Nelle is confrontational.

WEDNESDAY, AUGUST 5
Sonny has a crisis of conscience. Valentin propositions Sam. Alexis gets a visit from an old friend. Willow and Michael grow closer. Nelle demands to see Wiley.

THURSDAY, AUGUST 6
Jordan confides in Jason. Maxie and Lucy agree on a decision about Deception. Sam and Carly bond over a common struggle. Curtis runs into Chase. Cyrus meets with Brando.

FRIDAY, AUGUST 7
Sonny visits with Brando. Cyrus continues to manipulate Jordan. Finn and Portia bond over the relationships they have with their daughters. Maxie has second thoughts. Anna defends Peter.

What do you think? Are you a fan of the General Hospital series? Are you planning to tune in for the new episodes?

I am a lifetime lover of GH….Pretty sure I have a crush on at least 20 or more GH Men. Even as a little girl I watched GH. I love the glamour of daytime Soaps. An escape to a rich life !!!
Thank you All General Hospital Cast and Crew!!
Lifetime Viewer
Rhonda Flinn
Boise Idaho

So happy GH is returning!!

I’m so happy General Hospital is coming back. I’ve been off work since March 19, so I got to watch some of the episodes till it went off so this will help some of my time being off, probably will not be going back to work since I work for in the schools. I’ve been watching General Hospital since I was in the seventh grade, of course I’ve missed a few episodes because of life, but I’m just thrilled it’s back.

Hooray!!! Cannot wait for the new episodes to start airing again and provide me with my anchor once again.

You bet! I have watched since the 1st episode! I can’t wait to see it return!

I’m sooooooooooooo excited. This is the one thing on tv I’ve missed.

I don’t watch it, have family that does, but I am surprised that the material hasn’t run out !