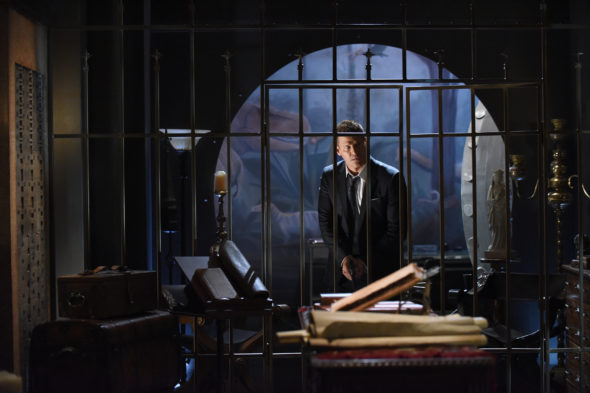 After the TV series finale, could there be future installments of the Bones TV show on FOX? Pictured: David Boreanaz as Seeley Booth (Ray Mickshaw / FOX).

File this under: It Ain’t Even Over When It’s Over. While the 12th and final season of the Bones TV show premieres on FOX, Tuesday, January 3rd at 9:01pm, executive producer Michael Peterson seems fairly insistent that the crime procedural starring Emily Deschanel and David Boreanaz could return in some fashion.

The EP told TVLine, “I absolutely am not considering this the end. I am in full-on denial. I’ve been working on the show for eight-and-a-half years. It is my family. I adore it here. I don’t want to leave. And the idea of having some kind of reunion in a year or two. I would not rule it out.”

After Its TV Series Finale Will Bones Return?

While the 12-episode final season wrapped production in December, when TVLine asked him if FOX would strike and destroy the sets or preserve them, Peterson said, “That’s a very tricky one to answer. I don’t know exactly what they’re doing with them.”

Although he doesn’t know how they would handle a Bones TV series reunion, Peterson said, “…I can tell you that 99.9999 percent of the people here would rush to return.”

According to FOX, Bones‘ 12th and final season will bring the storylines of Brennan, Booth and the Jeffersonian-FBI team to a close. The network promises Bones season 12 will provide fans with the chance to say goodbye to these beloved characters. Finally, FOX says, “Over the course of the farewell season, fans will experience deaths, a wedding, epic serial killer storylines and an undercover episode.”

What do you think? Will you watch the Bones season 12 premiere tomorrow, on FOX? Would you like to see Bones continue as occasional TV movies or in some other way? Let us know, below.

I breathed every episode of the 12 seasons, Bones is just part of my life, it’s my mirror and it teaches me a lot. come back Bones I need to breathe again.

I loved Bones, it was a great show. How wonderful it would be to see Hodges walk again.

Please bring Bones back.i want to see Hodges walk again. I loved it so much.
Don’t wait too long.

Yes please continue with more series. Since there is no more CSI Las Vegas, we really love Bones.

PLEASE bring BONES back. Love it. Very interesting very good show and I miss it. Could you please make some new ones

How can you end a show with a new beginning? That just doesn’t make sense. They should continue the series because it just doesn’t seem fair to end it the way they did. They have too many cliffhangers in the last episode and that’s just not cool. What happens after the remodel of the Jeffersonian? Obviously bones and booth are still actively working, why stop it there?

please bring back bones, even watch reruns, all cast should return. can still come back last episode was really a finale. please bones

I would love to have them return to finish the un solved cases. I have all 12 seasons

I think Bones is a GREAT show, bring it back with original characters, PLEASE!!!

We want to see season 13 of bones ! Ending wasn’t so convincing that’s finally over !! Please bring it back !!

PLEASE bring Bones Back, with original cast.
This is one of those series that shouldn’t ever end!