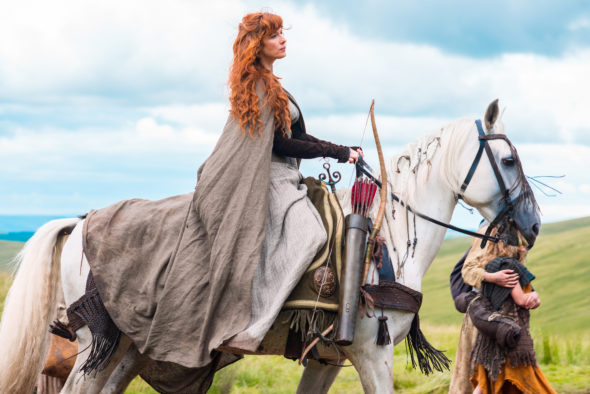 Is the Roman invasion a success in the first season of the Britannia TV show on Amazon? As we all know, the Nielsen ratings typically play a big role in determining whether TV shows are cancelled or renewed. Amazon and other streaming platforms, however, collect their own data. If you’ve been watching this TV series, we’d love to know how you feel about the Britannia season one episodes. We invite you to rate them for us here.

What do you think? Which season one episodes of the Britannia TV series do you rate as wonderful, terrible, or somewhere between? Should Amazon cancel or renew Britannia for a second season? Don’t forget to vote, and share your thoughts, below.

I am loving Britannia. We watched the first two episodes then came back a few days later and binge watched all but the final episode. I am so hoping this is renewed!

KI really want to see where this story is going!

Love the tv program and can’t wait for season 2!

[Oops! In reference to my Game of Thrones comment, I didn’t mean anyone on here -I was referring to the numerous negative reviews out there that complain about Britannia not being Game of Thrones.]

For weeks I’d been hunting for a good, solid, escapist binge-watch – preferably historical drama or fantasy – and found myself stuck in a rut where I couldn’t get into anything. Despite its mixed reviews, I decided to give Britannia a shot, and was pleased to discover that it caught my attention immediately – and then basically held it hostage over the last three days. Please renew! I watched it too fast! Good acting (David Morrissey was SO well-cast; his gravitas allows him to pull off the whole folk horror thing) and an unexpected perk is the humor – the… Read more »

This show is fantastic!!! Keeps you guessing!! It makes u feel like your there and a part of the characters!!! Please keep this show going!!! I’m sick of getting into a show and really liking it and then it’s cancelled… So please continue this show… Thanks to all for wonderful entertainment!!!

Please renew, we’ve been watching the show with our two 14 year old boys, and have all enjoyed it immensely!

I’d love to see a season two to find out what happens with Cait! Scenery was superb.

This show was awesome! I absolutely loved it! Please Amazon, continue the show, I will pay for more seasons! May we get many, many more seasons of this show to come. Brilliant acting and excellent cast and the story so far is great. Please give us more druid magic / spells and restore the girl’s blind father’s eyesight in the future, because good people just need to be cut a break by the Gods now and then! Everyone who worked on this show did an excellent job. My only criticism would be the music interlude to the show’s starting –… Read more »

Another season please! I love this better than Game of Thrones!

I would love to see season 2. I got into the the whole season. I couldn’t believe the end of season one but can’t wait for season 2

Its brillant loved all 9 episodes

Please please do not cancel Britannia!! It’s the best show I have seen in many years!! Have watched all episodes at least 5 times.