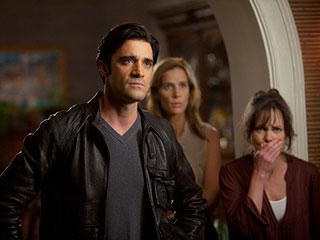 In a somewhat surprising move, the alphabet network has cut a beloved family drama after five seasons on the air. Season six of Brothers & Sisters won’t be on ABC’s fall schedule.

The family drama was nearly cancelled last year but was ultimately renewed for an abbreviated fifth season. In light of some positive ratings, ABC ordered additional episodes, bringing the season total to 22 installments. Unfortunately, those ratings didn’t last.

The numbers slowly declined over the course of the season but really seemed to take a dip in the latter part of the season, just when execs were trying to figure out if it was worth renewing. Rumors started circulating that Brothers & Sisters would be cancelled and then there was word that ABC was considering an abbreviated sixth season to wrap things up.

In the end, network execs decided there just wasn’t enough interest in the show anymore and wanted to use the post-Desperate Housewives timeslot for a new series.

As a result, last Sunday’s season finale will end up being the series finale for Brothers & Sisters. It’s a sad and unfortunate end for a once popular series.

What do you think? Are you sad to hear that Brothers & Sisters won’t be back for season six? Was it time for the series to end?

Can’t believe this. One of my favorite shows. I look forward to it every week. Can’t imagine another show replacing it. It will probably be another cop show, or reality show. Darn it.

THIS IS HORRIBLE! I AM SO MAD! This is my all-time favorite show. It was the night-cap to my weekend.

I am very sad it is being cancelled – it is (was) my favorite show on tv. But I think they had an idea it might happen. When I watched the season finale it seemed a lot like a series finale. I will miss the Walkers!

I am so very disappointed with ABC…I probably will not watch any other show that they may put in that time slot. It’s a good show with lots of heart and it touches many subjects that affect REAL families. I hope they reconsider.

Very upsetting news…..this is a great show! I think the popularity would have remained more consistent if the NEW episodes would have been more consistent. It seemed like you’d see one new episode, then they’d show 3 old ones, then a new one would pop up. No predictable pattern=loss of weekly viewers. I’ll miss this show!

Becky that is so true. Luckily I have a DVR so I was able to keep up with the new episodes. But it did seem to lapse a ton. I would turn it on expected to catch up with my favorite family only to see that it was a repeat. Had they just opted for an entire season in the beginning it would have avoided the lapse in production. So frustrating!

This is extremely disappointing to me, it seems like all the quality shows are cut short too soon. Between this and the cancellation of Friday Night Lights, it seems like the only shows people want to watch are the trashy ones that aren’t written well and revolve around sex. Both were beautifully written shows and they will truly be missed!

I so looked forward to Sunday nights…the walker family was realistic to me…they fought,cried,laughed,and loved together…they never seemed phony,plastic,or fake in any way…Nora walker was my role model for the perfect mom…flawed,but human…the Xmas show where she thought the kids were ok without her was priceless…..bring on the petitions….WALKERS’S ROCK!!!

I am so SAD!!!! This was my favorite show! I can not believe that itis going off air. BRING IT BACK ABC!!!!

What is wrong with ABC? Are they all losing their minds? Why take off so many of your Great shows that have such dedicated and loyal viewers? Wake Up!

I an not happy. I have watched this show from the beginning and am very disappointed in ABC.

I loved this show. I admit I missed Rebecca this year. But I loved all the players. Didn’t care that Rob Lowe left.

I cannot believe this! I hate when tv shows don’t get a proper ending and we the viewer are left behind

I am so upset. I feel like all of my favorite shows are being cancelled. This truly makes me think of Getting rid of my T.V. It seems like we become a part of these shows by watching them and then they are cancelled . It is like a death. Recently they had announced that All my Children and One life to Live is being Cancelled. They have been on for years…..What is gonna be next? People need some certainty in their life. Brothers and Sisters rocks!

It is sad, but it really seem as it was time and the series had ran it course. I wish it could have gotten a 6 seasion to end it the way they would have wanted. The series last a respectfull 5 seasion with over a 100 episodes. Their is nothing for them to be a shame of.

Hey, if it makes you feel any better, The Event’s been canceled too.

I LOVE BROTHERS AND SISTERS.
Because of my schedule, I settle for watching it on DVR, not on the actual Sunday nights, so I am so sad! 🙁 Why cancel this, but keep shoes like “The Event” and those other crap shows?

It is sad because it seemed like the writing really went awry this past season. The loss of both Holly and Rebecca were huge losses in my mind and contributed to lost ratings.

I am so upset to hear of this! I live for Brothers and Sisters and watched it every week and DVRd it if I could not make it and watched it as soon as I got home. I wish this wasn’t true. It was not a true wrap up to be a finale. I have a Mom, sister and many friends who all watch the show and we talk about it after each week. Who gave those ratings? We were never polled. This should not be happening. It is a great show and we all love it, wish they would… Read more »