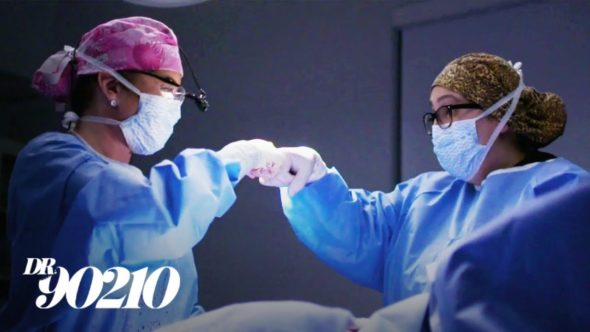 Three series are coming soon to E! The network has ordered Celebrity Game Face, 10 Things You Don’t Know, and a revival of Dr. 90210.

E! revealed more about the orders in a press release. Check that out below.

The special features Kevin Hart and his wife Eniko along with couples Terry and Rebecca King Crews, Sarah Hyland and her fiancé Wells Adams, and Joel and Sarah McHale. The Harts lead the teams through a hilarious game night full of fun, fresh and wildly unexpected moments, as the celebrities engage in a range of ridiculous physical challenges that viewers can play along at home. The pairs will show off their teenage dance moves in a tik “talk” challenge, feed each other a messy meal with a twist, attempt to interpret what their partners are saying while their mouths are full and race through their homes to find unexpected items to solve riddles. At the end of the night, the couples are awarded money for their charity of choice, but only one team will win the coveted “Hart of a Champion” trophy, which is a gold statue of baby Kevin Hart.

Each comedic half-hour self-contained episode will highlight a celebrity and countdown the 10 most unique, unbelievable and surprising facts you don’t know about that person. From Brad Pitt, Jennifer Lopez and Tiffany Haddish, to Will Smith, Lady Gaga, Keanu Reeves and more, the series will uncover all the hysterical, outrageous, only-in-Hollywood scoop that prove stars really are just like us.

Produced by Entertainment One (eOne) with Tara Long, Mark Herwick and Ben Megargel as Executive Producers alongside Lori Gordon.

Plastic surgery has long been a male dominated field, with only 15 percent of surgeons being female, but in Beverly Hills there is a new squad of women redefining age-old beauty standards. Dr. Cat Begovic, Dr. Kelly Killeen, Dr. Michelle Lee and Dr. Suzanne Quardt are some of the top female surgeons in the country and are breaking down barriers in the world’s most famous zip code. From excess skin removal, third breast extraction, and a double mastectomy, to facial cysts and post childbirth vaginal rejuvenations these four doctors use their remarkable insight, skill, and bedside manner to guide patients from consultations to surgery and recovery, proving a woman’s touch can go beyond skin deep.”

What do you think? Will you check out these shows when they arrive?