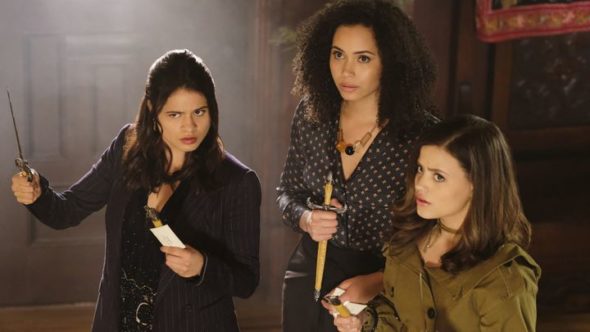 The CW is going all in. Today, the network announced they’ve given full season orders to Charmed, All American, and Legacies.

A reboot, Charmed centers on three sisters who discover they have special abilities in the wake of their mother’s murder. All American follows Spencer James (Daniel Ezra), a high school football star from Compton who is recruited by a team in Beverly Hills. And Legacies is a spin-off of The Originals that centers on Hope Mikaelson (Danielle Rose Russell), daughter of the Original, Klaus Mikaelson (Joseph Morgan).

All three of The CW’s new fall series have seen sizeable increases once delayed viewing is factored in, especially CHARMED which has seen its linear ratings more than double in key demos in Live+7 viewership (+105% in adults 18-34 and +108% in adults 18-49).

With The CW positioned as a true multiplatform network, all three freshman dramas have been strong performers via streaming on The CW’s digital platforms. In just a few weeks, LEGACIES and CHARMED respectively rank as the third and fourth most streamed shows of the season for The CW. LEGACIES has the distinction of having the best new series launch ever on The CW’s digital platforms.

With more original programming than ever this season, The CW still has five series set to premiere during the midseason 2019, including new series ROSWELL, NEW MEXICO and IN THE DARK, the final seasons of JANE THE VIRGIN and iZOMBIE, and the return of THE 100. Premiere dates for The CW’s midseason shows will be announced at a later time.”

What do you think? Are you watching any of The CW’s new series? Which do you hope get renewed for a second season?

Me and my hubby love love love Legacies, he is not a big fan of Charmed but i think its only because hes a man lol but I have watched all the Vampire Diaries, Originals, and Legacies is just the icing i am a religious watcher!!! Charmed is a good one too but obvs. Legacies is way more up my alley!!!

I like both Legacies and Charmed. I’m an original fan of the old Charmed, and would like to see a connection to ground those of us original fans. I this is another reason why I like Legacies. It connects it through crossover with the other two, Vampire Diaries and The Originals. Please renew these series!

I love the Original Charmed, so charmed reboot i dont like not enough saving and casting spells. Beside Sunday i watch NCIS LA and Wednesday i watch CHICAGO FIRE.

Same! I watch Legacies on the CW app as soon as a new episode is posted. Love love love Hope and Landon.

Spencer’s from Crenshaw, in Beverly Hills