A new Live in Front of a Studio Audience special is on the way. This time, ABC viewers will see episodes of the sitcoms Diff’rent Strokes and The Facts of Life recreated with new actors playing the roles. John Lithgow, Kevin Hart, Damon Wayans, and Ann Dowd are set for the Diff’rent Strokes cast. The cast for The Facts of Life portion of the event will be announced later.

ABC revealed more about the special event in a press release.

“Emmy® Award-winning Live in Front of a Studio Audience makes its highly anticipated return with a third iteration, featuring live reenactments of the hit series The Facts of Life, created by Dick Clair and Jenna McMahon, and Diff’rent Strokes, created by Bernie Kukoff and Jeff Harris. Live in Front of a Studio Audience: The Facts of Life and Diff’rent Strokes premieres TUESDAY, DEC. 7 (8:00-9:30 p.m. EST), on ABC.

The one-night-only live event will reunite executive producers Norman Lear, Jimmy Kimmel, Brent Miller, Kerry Washington, Will Ferrell, Justin Theroux and Jim Burrows and will feature an all-star cast with John Lithgow who will play Mr.Drummond, Kevin Hart assuming the role of Arnold and Damon Wayans and Ann Dowd who will play Willis and Mrs. Garrett in“Diff’rent Strokes.” The cast of “The Facts of Life” will be named at a later date.

As recently announced, immediately following Live in Front of a Studio Audience: The Facts of Life and Diff’rent Strokes,” workplace comedy Abbott Elementary, starring and executive produced by Quinta Brunson, will debut with a special early premiere on TUESDAY, DEC. 7 (9:30-10:00 p.m. EST). The all-new series is then set to air new episodes in its regular time period starting TUESDAY, JAN. 4.

“Other than with my family, there’s no place I’d rather be in my 100th year than on a soundstage at Sony with these glorious actors reliving what our company had produced all those years ago and sharing it with the millions of viewers who could use a little laughter,” said Norman Lear.

“Thanks, again, to ABC and Sony Pictures Television for supporting our creative conceit and our incredible cast as we try to make what might seem like the impossible possible — once again. I couldn’t be more excited to end this year producing a project that supports, promotes and encourages appointment TV with those you care for,” said executive producer Brent Miller.

Executive producer Kerry Washington said, “It has been an honor and highlight of my career to collaborate with the legendary Norman Lear, Jimmy Kimmel, ABC and Sony. Part of the magic of Norman’s iconic TV series is that they resonate with audiences today just as much as they did decades ago. Reliving and reimagining them feels like pure joy. I keep wondering when this will start to feel like work!”

“Live in Front of a Studio Audience has become one of our most anticipated highlights of the year — it brings some of the biggest and funniest stars on the planet together on the same stage, where truly anything can happen, to introduce a whole new generation to Diff’rent Strokes and Facts of Life,” said Craig Erwich, president, Hulu Originals and ABC Entertainment. “Jimmy and Norman have outdone themselves with a spectacular, irreverent and hilarious cast to once again create a can’t-miss television event.”

“As Norman Lear approaches his 100th birthday, what better way to celebrate him than bringing back these classic shows, Facts of Life and Diff’rent Strokes. It has been such an honor to work with Norman Lear, Jimmy Kimmel, Brent Miller and our partners at ABC on the live specials. We look forward to seeing another stellar cast bring families together and enjoy this exciting format,” said Sony Pictures Television Studios President Jeff Frost and Co-President Jason Clodfelter.”

Check out a poster for the event below. 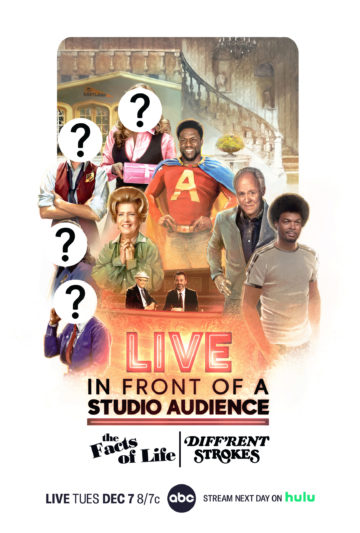 What do you think? Are you excited about this new Live in Front of a Studio Audience special airing next month? Were you a fan of Diff’rent Strokes and Facts of Life when they originally aired?

OMG will someone please just disconnect their phone and power supply – why all these remakes (aka destroying) keep happening. Is there no creativity left, no imagination – someone in Hollywood, please stop navel gazing about who you’ve offended or how to stay off drugs and go back to both.. at least back in those days television shows were more often original and interesting. At least I can say I saw what humanity looked like when creativity and art and good ideas completely died.

I’m so sick of these amazing classics being destroyed by remakes.

Won’t be the same without Paul Vogt as Mrs. Garrett.