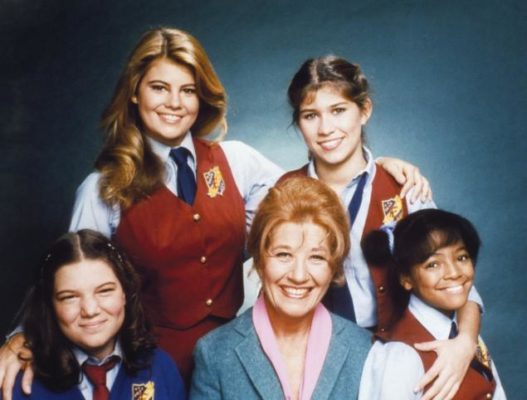 Another ’80s sitcom may be making a comeback. Deadline reports both Leonardo DiCaprio and Jessica Biel’s production companies are developing a reboot of The Facts of Life.

A spin-off of Diff’rent Strokes, the original sitcom followed the residents of all-girls boarding school in upstate New York. The cast included Charlotte Rae, Kim Fields, Lisa Whelchel, Mindy Cohn, and Nancy McKeon. The show ran on NBC from 1979 to 1988.

Few other details have been released, but the studio is reportedly searching for a writer for the project.

What do you think? Do you remember The Facts of Life? Would you watch a reboot?

Gee…I don’t know why TV viewers are dropping like flies! Could reboots be the reason? FOR THE LOVE OF JESUS….STOP!

For the love of all that is tv! Stop rebooting or resurrecting everything! Sheesh. Alf, Will and Grace, Murphy Brown, etc. Come up with something original. What’s next? Taxi? The Dick Van Dyke show? Come on. Enough is enough.

It was when last man standing when another network we died. Because we seem to think tv is are safety from what the bad in lives. Feeling all will all return to good……sad sad.live now not years ago.

Enough is enough? You forgot ‘Eight is Enough’! 😛

Ok, honestly? I’ve had enough of TV at this point. All anyone wants to do now is bring old shows back and either revive or reboot them. Why even watch TV now?

Yes with the same actors

Yes with all the same actors!