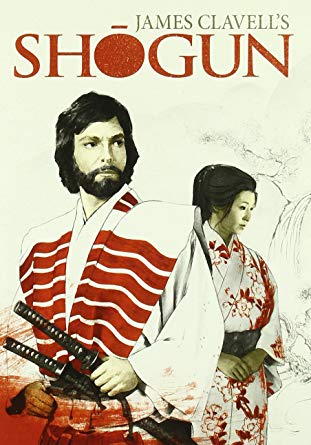 It seems that everything that’s old is new again. FX has announced they’ll be airing a new Shogun TV series, based on the James Clavell novel that was published in 1975. TV viewers may recall that NBC aired a five-night mini-series based on the book back in Fall 1980 (above). Starring Richard Chamberlain, the peacock network’s Shogun averaged 25.4 million viewers for each of the 12 broadcast hours. FX isn’t expecting those kinds of numbers but they no doubt have high expectations just the same.

Based On The Classic Best-Selling Novel by James Clavell

LOS ANGELES, August 3, 2018 – In its largest international scale production to date, FX has ordered Shogun, a 10-episode limited series period drama based on Shogun, the best-selling novel by James Clavell, it was announced today by John Landgraf, CEO of FX Networks and FX Productions.

Andrew Macdonald and Allon Reich of DNA TV (Ex Machina, 28 Days Later, Trainspotting), Michael De Luca (Moneyball, The Social Network), and Michaela Clavell will serve as Executive Producers along with Tim Van Patten (The Sopranos, Boardwalk Empire, The Pacific), who will direct multiple episodes of the series, Eugene Kelly (Westworld, Leftovers, Boardwalk Empire), and Ronan Bennett (Public Enemies, Top Boy), who will write the series. Rachel Bennette (NW, Bel Ami) is also onboard as Supervising Producer. Tom Winchester from DNA TV will serve as a producer on the series. Georgina Pope (Mr. Holmes, Kumiko, the Treasure Hunter) will serve as Co-Producer and Eriko Miyagawa (Silence) as Associate Producer. Shogun will be shot in the UK and Japan and produced by FX Productions.

“The story of Shogun has captivated audiences since James Clavell first released his epic novel more than 40 years ago,” said Landgraf. “The themes of an outsider encountering a new culture are as relevant today as then. We are honored to bring the series to today’s viewers through our partnership with executive producers Andrew Macdonald, Allon Reich, Michael De Luca, Clavell’s daughter Michaela, and Eugene Kelly. We are equally thrilled that Ronan Bennett and Rachel Bennette are writing the new adaption, and that Tim Van Patten will bring his vision and expertise to directing this saga of adventure, power and loyalty that the world has come to know as Shogun.”

Shogun, set in feudal Japan, charts the collision of two ambitious men from different worlds and a mysterious female samurai: John Blackthorne, a risk-taking English sailor who ends up shipwrecked in Japan, a land whose unfamiliar culture will ultimately redefine him; Lord Toranaga, a shrewd, powerful daimyo, at odds with his own dangerous, political rivals; and Lady Mariko, a woman with invaluable skills but dishonorable family ties, who must prove her value and allegiance.

Shogun, the novel, was published in 1975 and became a major best-seller with more than 30 million copies sold worldwide. It sparked great Western interest in Japanese culture. The original Shogun mini-series event premiered in September 1980 over five nights on NBC. Building on the earlier success of Roots, Shogun helped establish the mini-series as an ambitious new TV genre. It starred Richard Chamberlain as Major John Blackthorne, Toshiro Mifune starred as Lord Yoshi Toranaga and Yoko Shimada as Lady Toda Mariko. Shogun was a ratings and critical hit for NBC, as well as winning Emmy(R) Awards, Golden Globe(R) Awards and a Peabody(R) Award.

Since the creation of the Limited Series category by the Television Academy in 2012, FX has dominated in the category, scoring 204 Emmy Award(R) nominations and winning 34 Emmys with universally acclaimed shows including American Horror Story anthology, Fargo, American Crime Story: The People v. O.J. Simpson and Feud: Bette and Joan. FX has received the most Emmy nominations of any network or streaming service in the Limited Series category for seven consecutive years, and this year American Crime Story: The Assassination of Gianni Versace received the most nominations of any Limited Series with 18.

ABOUT FX
FX is the flagship general entertainment basic cable channel of FX Networks, a business unit of 21st Century Fox. Launched in June of 1994, FX is carried in 89 million homes. The diverse schedule features a growing roster of critically-acclaimed and award-winning hit dramas series, including Taboo, Legion, Snowfall, Trust and the upcoming Mayans M.C. and Mr Inbetween; the critically-acclaimed limited series American Horror Story, Fargo, American Crime Story and FEUD and the upcoming Untitled Fosse/Verdon series; acclaimed hit comedy series including Atlanta, Baskets and Better Things, and the upcoming What We Do in the Shadows; the dance musical series Pose, and the upcoming docuseries The Weekly with The New York Times. FX is the former home of the critically-acclaimed and award-winning hit drama series The Shield, Nip/Tuck, Rescue Me, Damages, Sons of Anarchy, Justified and The Americans. The network’s library of acquired box-office hit movies is unmatched by any ad-supported television network.

What do you think? Do you plan to watch FX’s new Shogun series? Have you seen the earlier version?

I Watched the org. series and am looking fwd. to the remake.

they need a strong person to play major blackthorn and that part is perfect for Keanu Reeves he would be the best for it and on top of it he speaks Japanese and it would make the movie filming go a bit faster. as for the cast for Lord Yoshi Toranaga i would go with Etsushi Toyokawa as him. he has the class to pull it off.

I am looking forward to seeing remake. The 1980 mini series was FANTASTIC. I hope this remake will be able to do just as well. When should we expect to see it?

I am VERY excited about this – the 1980’s miniseries is one of my favorite movies of all time. I didn’t catch it, but did anyone see or know of a release date for the premier on FX? Domo! 🙂

Yes…..I will watch the 10 part series. When will it be aired or start production?? “Kathy B” is right……..Richard Chamberlian is a hard “act-to-follow”!! Then you’ve got Toranaga, played by Japan’s National Treasure, Toshiro Mifune!! And Yoko Shimada played Beautifully, the classic Samurai daughter and womanhood in Feudal Japan!!! My one thought is…..that Jim Caviezel may be able to touch the Backthorne part. Anyway……there is a lot of Work to do in getting the Casting right………it can make or break a show!!

I sincerely hope that this new version is of the same high quality production values as the original. I also hope that the script is faithful to this beloved novel unlike a trashy movie version of another Clavell novel-Tai Pan-which was woefully miscast and totally screwed up with a horrid script that rearranged & outright deleted some parts of the novel. I truly LOVED the original ‘Shogun’ miniseries. It was breathtakingly beautiful & stayed true to the novel.

This is great news! I wonder who will play the lead? Richard Chamberlain did a very good job in the mini series. Whoever is cast will have to go some to equal his performance.