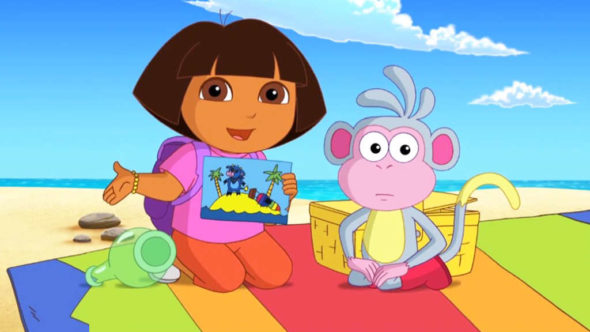 Dora the Explorer is headed to the big screen. According to The Hollywood Reporter, Paramount is developing a feature film based on the Nickelodeon TV show.

The children’s animated series focuses on Dora, a young girl of Mexican heritage who goes on adventures with her companion, a monkey named Boots. The educational show ended in 2014 after a run of eight seasons and more than 170 episodes.

Nick Stoller, who also worked on The Muppets and Storks, is writing the live-action Dora the Explorer movie. Platinum Dunes will produce the project, which is set for release in 2019. Not much has been revealed about the film, but THR reports “the live-action take is said to center on Dora, not as a 7-year-old as on the TV series but now a teenager who moves to the city to live with her cousin Diego.”

What do you think? Do you ever see Dora the Explorer? Do you think the movie is a good idea?

Can you ask Nickelodeon to see if it has been renewed for Season 9 or not?

My granddaughter loves the 7 year old Dora, she never cared about the older Dora, but she’s Autistic and non verbal, and doesn’t really care much abt tv but she always loved Dora, in fact she has 3 different Dora blankets that she has to have on her every night and Dora on one side of her and Boots on the other, she will not go to bed w/o them… When she goes to stay w/her dad, they have to go w/her…