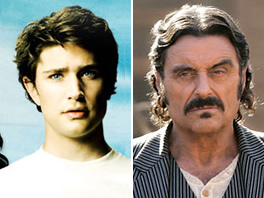 As we close out the first ten years of this millennium, it’s amazing how many great TV shows have been cancelled. Big as that list is, there are some that stand out more than others — mostly because they left us hanging. Here’s a list of 10 that deserved at least one more episode to wrap things up.

The 4400 — This show and The Dead Zone ran successfully for many years on USA. The ongoing mysteries of both shows kept viewers coming back for more each week. Unfortunately, the cable channel decided to be done with them in 2007. The shows and their viewers were left with unresolved cliffhangers. Of the the shows, 4400 seems a bit more tragic as it wasn’t on for as many seasons and Dead Zone fans have a freaky Christopher Walken movie.

Deadwood — It doesn’t matter whose fault it was — HBO’s or creator David Milch’s — this hard-talking Western remains one of the highlights of the pay-for-view channel’s history. For it to end without a finale is #$%^&$% unforgivable.

Invasion — Following the instant success of ABC’s Lost in the 2004-05 season, the networks thought that sci-fi was the key to success and brought us shows like Surface and Invasion. None of them caught on and Invasion left viewers hanging with a particularly frustrating set of cliffhangers.

Kyle XY — Sure, the show about the incredible kid without a memory or a bellybutton had lost some steam in the ratings but it didn’t deserve to go out with big cliffhangers. Considering that the series had one of the biggest premieres in ABC Family’s history, the show and its fans deserved one more episode to properly close the show.

Las Vegas — It’s one thing for a show to be cut off during its first season but it’s really annoying when a long-running show is denied a resolution. Should it have been cancelled? In its fifth and final season, Vegas attracted almost as many viewers as fellow Friday night occupant Ghost Whisperer; a series that’s still running on CBS. Bet NBC wishes they had Vegas’ ratings now.

My Name is Earl — You have to wonder if NBC’s current troubles doesn’t have to do with a little bad karma. In its heyday, NBC promoted the heck out of Earl but, when the ratings dwindled too low, they cut it off. Did Earl ever complete his list? We’ll likely never know.

My Own Worst Enemy — NBC pulled the plug on the Christian Slater series so that the last episode ended with a murder and a lot of unfinished business. Couldn’t they have made one more episode to tie things up or at least recut the ending?

Reunion — You probably don’t remember this FOX series. It was a drama about six high school friends and one is murdered at a 20 year reunion. While the mystery is investigated in the present, episodes flash back to the past to see how the characters changed over the years. It was an ambitious series but apparently no one considered the possibility that it could be cancelled before the end of the season. FOX pulled it after nine episodes aired and the loyal viewing audience was left hanging (sort of).

Terminator: The Sarah Connor Chronicles — It was no surprise that this series was cancelled but it still ended on a big cliffhanger — with John Connor travelling to a future that’s never heard of him. Couldn’t the story have been resolved somehow? Series creator Josh Friedman once conceded that the third season would have been the show’s best. Judging by the last episode, it appears he was right.

Vanished — Just one of many series from the 2006-07 season that revolved around ongoing sorylines and mysteries. This series, like The Nine, Six Degrees, Runaway, Drive, and The Black Donnellys, was cut off way too prematurely. We did learn kidnapped Sara Collins’ fate but so many other mysteries were left to the imagination. There was talk of revisiting some of the characters on an episode of Bones but it never happened.

What do you think? Are there other frustrating last episodes that you’d add to the list?

‘Las Vegas’, ‘My Own Worst Enemy’, & ‘Sarah Connor’ are the real kickers on this list. ‘Vegas’ especially. Look it was an idiotic move. They will be selling this thing on DVD and in reruns for decades to come with no finale? They could have finished the whole thing with ONE more 40 minute episode. It would have been rushed, but STILL! ‘Kings’ was one of the greatest shows ever. Major mistake not selling it to HBO. They would have kept it on. or Showtime. The cliffhanger ending was too sad. I wanted resolution. If it had an ending where… Read more »

Eastwick – It’s bad enough that it’s getting cancelled, but the fact that ABC skipped Episode 11 and may not air Episode 13 is absolutely outrageous!

Everyody Hates Chris and the Game i will never ever watch the CW again!

Samantha Who?, Thats So Raven, Cory In The House, Living With Fran, Drake & Josh.

For me, Carnivále has the most painful and frustrating cliffhanger ending. Veronica Mars is a very, very close second.

Eastwick, among others, but that’s the one fresh on my mind. They should keep making it and just air it online.

though it was listed to end, The Sopranos was real frustrating. it cuts off randomly. same with Everybody Hates Chris

I think the Eastwick fans have alot to but frustrated about. Not only did the final episode have unresolved cliffhangers involving new characters with no background yet, but the 2 episodes that would have led to the last episode making any kind of sense were unaired. 3 characters were about to die in episode 10 and in episode 11 we only see how 1 character is save. The problem though… Saved By The Other 2 That Were About To DIE!

The unresolved cliffhanger for “John Doe” was particularly frustrating.

@JD: I agree. I thought of that one immediately after posting this.
@Dave: Don’t forget Primeval.