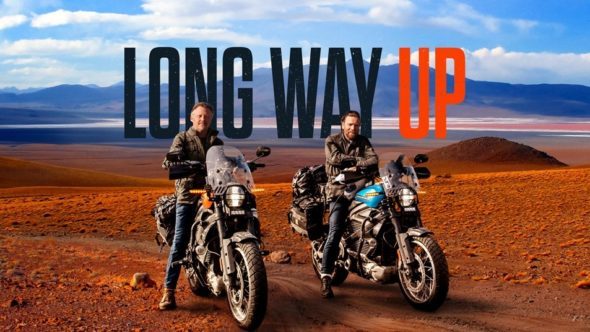 Long Way Up is traveling to Apple TV+. The new unscripted series follows the adventures of actor Ewan McGregor and UK writer/presenter Charley Boorman as they journey across more than 13,000 miles together. Their motorcycle journey takes them the length of South America and part of North America, ending in Los Angeles.

Apple TV+ revealed more about Long Way Up in a press release and trailer.

“The trailer for Long Way Up, the epic, new Apple Original series from stars Ewan McGregor and Charley Boorman is now available. The first three episodes of the 11-part unscripted series will premiere globally on Apple TV+ on Friday, September 18. New episodes will roll out weekly, every Friday.

Long Way Up reunites McGregor and Boorman for the ultimate adventure in travel and friendship after more than a decade since their last motorbike adventure around the world. In their most challenging expedition to date, the two cover 13,000 miles over 100 days from Ushuaia at the tip of South America to Los Angeles. In order to contribute to the sustainability of the planet, the duo travels on prototype, electric Harley-Davidson LiveWire(R) motorcycles.

Using cutting-edge technology, they travel through 16 border crossings and 13 countries along with their longtime collaborators, directors David Alexanian and Russ Malkin, who follow in the first two electric Rivian trucks ever made.”

What do you think? Are you a fan of Ewan McGregor or Charley Boorman? Will you check out the Long Way Up TV show on Apple TV+?