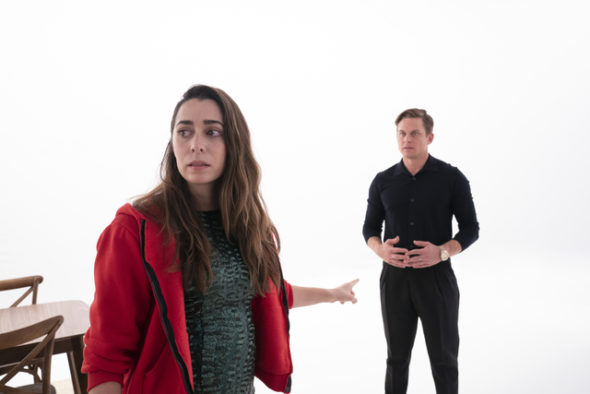 Hazel and Byron are really over. HBO Max has cancelled the Made for Love TV series so the characters won’t be back for a third season.

A single-camera comedy series, the Made for Love TV show is based on the novel of the same name by Alissa Nutting. The show stars Cristin Milioti, Billy Magnussen, Dan Bakkedahl, Noma Dumezweni, Augusto Aguilera, Caleb Foote and Ray Romano. This cynically poignant story of love and divorce follows Hazel Green (Milioti), a thirty-something woman who’s on the run after 10 years in a suffocating marriage to Byron Gogol (Magnussen), a controlling tech billionaire. She discovers that her husband has implanted a high-tech tracking device in her brain — the Made for Love chip. This chip allows him to track her, watch her, and know her “emotional data” as she tries to regain her independence.

In the second season, in order to save her father’s life, Hazel returns to the Hub, Byron’s high-tech palace. But once inside, she and Byron both become ensnared by Gogol’s newest revolutionary (and dangerous) technology.

Made for Love debuted on April Fool’s Day in 2021 and season two launched on April 28th of this year. Though it’s a half-hour series, HBO Max opted to release episodes in one-hour blocks. The de facto series finale was released on May 28th. Variety was first to report the cancellation.

“We are tremendously grateful for the truly spectacular journey of these past two seasons, courtesy of Alissa Nutting, Christina Lee, Cristin, Billy, Ray and the entire ‘Made for Love’ cast and creative team – especially Zelda the talking dolphin and everyone’s favorite synthetic love interest, Diane,” representatives for HBO Max said in a statement. “Like a Gogol chip, the series will always be on our minds.”

What do you think? Did you enjoy the Made for Love TV series? Are you disappointed that there won’t be a third season for this HBO Max show?

I liked the first season, the second not much ….