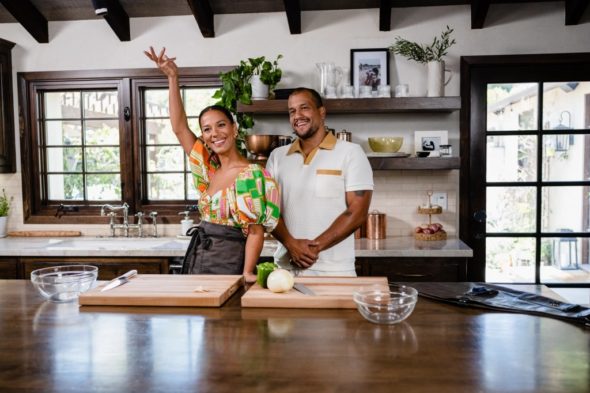 The new shows joining the network include Everyday Cooking, In the Kitchen with Abner and Amanda(above), Inspired Interiors with Sarah Sherman Samuel, Make Yourself at Home with Maddie Moate, Storefront Stories; The Story of Home with Jersey Ice Cream Co.’s Tara Mangini and Percy Bright, and The Williams Family Cabin with Stacy and Zach Williams.

Deadline revealed more about the new arrivals, including their premiere dates. Check out those details below.

Everyday Cooking: Samantha Seneviratne reveals that even on your busiest days, every home cooked meal can still be easy, exciting and full of flavor.
Ten half-hour episodes, produced by BFD
Premieres October 30 on Magnolia Network and discovery+

In the Kitchen with Abner and Amanda: This series follows Abner and Amanda Ramirez of Johnnyswim as they prepare their favorite meals at home.
Six half-hour episodes, produced by Blind Nil
Premieres October 21 on discovery+

Make Yourself at Home: Maddie Moate explores unique homes across the globe which reflect their owners’ personalities, passions and philosophies for life. These visionaries dared to dream, build, and live differently, challenging the way we see home.
Eight half-hour episodes, produced by Lion
Premieres October 14 on Magnolia Network and discovery+

Storefront Stories: The shopkeepers of beautiful and unique stores all over the country uncover the heart, vision and history of their retail spaces.
Ten midform episodes, produced by Blue Chalk
Premieres November 25 on discovery+

The Story of Home (wt): Jersey Ice Cream Co. founders Tara Mangini and Percy Bright are interior designers with a passion for old homes. After years of designing for others, they bought an old house in upstate New York and are creating a dream home of their own. Living in a house they’re renovating has its challenges, but the results are beautiful.
Six half-hour long episodes, produced by Big Table Media
Premieres November 29 on Magnolia Network and discovery+

The Williams Family Cabin (fka Home Sweet Hideaway): Stacy and Zach Williams learn that renovation is full of surprises as they transform a cabin just outside of Nashville into a creative retreat while balancing their full-time jobs and four kids.
Six half-hour episodes, produced by York & Wilder
Premieres October 1 on Magnolia Network and discovery+”

What do you think? Are you excited to see Magnolia’s new and returning shows?

Why was “Homework” left out,that was such a true family program,such a sweet family dynamic,a true pleasure to watch. The Utah school house was spectacular! Why did they bring back the Johnny Swim couple, not as interesting at all, not trying to be rude just honest. What a shame.