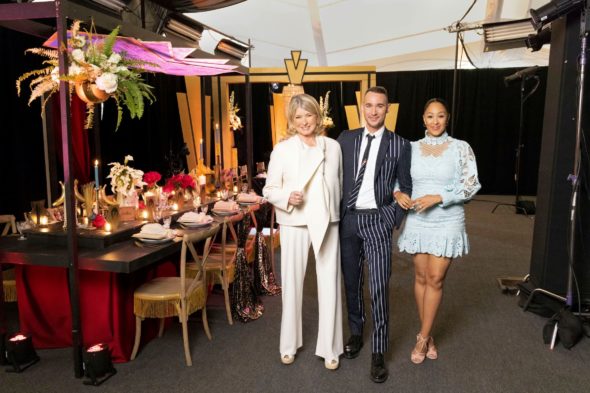 Table Wars is coming soon to HGTV and Discovery+. The new competition series will feature eight contestants trying to design the best-themed dining environment. Martha Stewart and Chris Hessney will judge and Tamera Mowry-Housley will host the seven-episode series.

HGTV revealed more about the upcoming show in a press release.

During each episode of Table Wars, the competitors must design and install the ultimate themed dining environment that features stunning tablescapes, centerpieces, lighting and displays to wow the judges and avoid elimination.

Inspired by real tablescaping competitions, Table Wars will raise the stakes by challenging the competitors to go beyond table set-ups. Each week, the table warriors will have access to a fully stocked workshop and event space to design and build their over-the-top creations with themes ranging from Winter Wonderland and Outdoor Wedding to Decade Design and Wildest Dreams Fantasy.

On TikTok, HGTV will follow the Table Wars action each week, including close-ups of the show-stopping designs and reveal fun behind-the-scenes moments from the series.

In the new weekly digital series Table Wars: The Look for Less, host and designer Ursula Carmona will recreate the winning tablescape for a fraction of the cost. It will be available to view on HGTV.com, Facebook, Instagram and HGTV GO.

For those who can’t get enough high-stakes tablescaping, fans can check out “SET!”, a behind-the-scenes look into the highly competitive, often hilarious and cut-throat world of competitive table setting, which is available to stream on discovery+. For show updates on Table Wars, fans can visit HGTV.com and follow @HGTV and #TableWars on Facebook, Twitter, Instagram and TikTok.

Table Wars is produced by Leftfield Pictures and Xpedition Media.”

What do you think? Do you plan to check out Table Wars on Discovery+ or HGTV?

Is this show still airing? I can not find a schedule.

Neither can I. Has Discovery Plus taken us cable watchers hostage again?

It is not on my tv schedule was it cancelled?