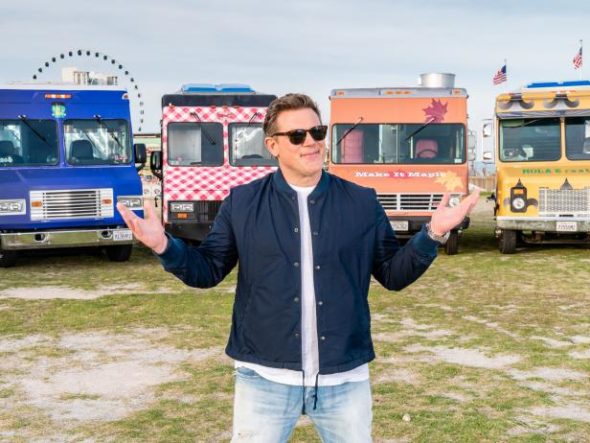 The Great Food Truck Race is returning to Food Network. The cable channel has picked up a 15th season of the cooking competition series. Hosted by Tyler Florence, the eight-episode season will debut in June.

Food Network revealed more about the new series in a press release.

“The Great Food Truck Race heads to the beach for the hottest season ever this summer with a brand-new action-packed culinary road battle along the sunny Southern California coast, premiering Sunday, June 5th at 9pm ET/PT on Food Network and streaming on Discovery+. In the eight-episode season hosted by Tyler Florence, nine teams of aspiring food truck owners with specialties ranging from fresh pasta to plant-based Cuban dishes must prove their cooking chops, marketing savvy and selling skills in high-stakes challenges to beat their rivals and stay in the race. Kicking off in Laguna Beach with a spicy hot pepper challenge, the route then hits beach locations for intense cooking rounds and selling challenges, from Venice for a visit from Chef Antonia Lofaso and a hemp-inspired menu challenge to a selling competition at The Grand Prix of Long Beach. Other stops include Los Angeles where the teams compete against two-time Race winners The Lime Truck, Redondo Beach for a lunch-on-the-go challenge judged by Race alumni Seoul Sausage, serving beach volleyball players in Manhattan Beach and a visit to the Glamis Dunes, culminating in a head-to-head finale in San Diego where only one team is awarded the life-changing $50,000 grand prize.

“The Great Food Truck Race’s innovative teams, mind-blowing food and beautiful locales make this show a perfect way to celebrate summer,” said Jane Latman, President, Home and Food Content & Streaming, Warner Bros. Discovery. “The only thing hotter than the food is the rivalries – these teams are truly in this competition to change their lives and move forward in their quest to have their own business.”

In the season premiere, the competitors meet Tyler and see their food trucks for the very first time in Laguna Beach. Things get spicy very quickly in the first challenge as Tyler reveals a table stocked with colorful hot peppers – and the teams must create their hottest dish to impress Tyler. In the selling round, rivalries and alliances are quickly born as the teams battle to get customers and one truck is sent home. Upcoming episodes visit Los Angeles where the trucks must sell against two-time Race winners The Lime Truck, a high-energy Venice Beach challenge inspired and judged by Chef Antonia Lofaso and on-the-go lunch delivery in Redondo Beach with Race alumni Seoul Sausage. In the finale on Sunday, July 24th at 9pm ET/PT, the two remaining teams go head-to-head in San Diego and the last truck standing is awarded the $50,000 grand prize.

Fans can get to know the competing teams and find out where Tyler likes to eat when he’s on the road at FoodNetwork.com/GreatFoodTruckRace. Follow along with the competition on social media and tell us which truck is serving up the best grub using #GreatFoodTruckRace.”

What do you think? Do you plan to check out the return of this series on Food Network?

I will be watching! So excited!