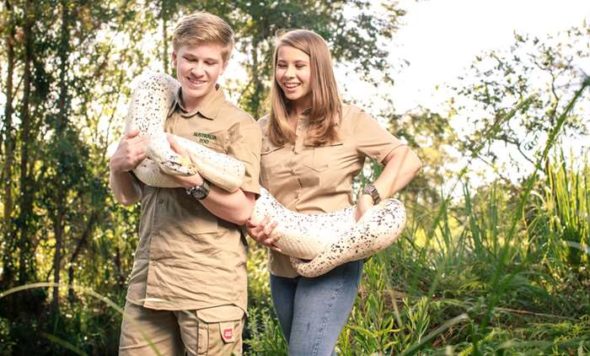 Crikey! It’s the Irwins is bringing its third season to Animal Planet. After premiering on Discovery+ earlier this year, the episodes will now air on linear television.

Animal Planet has revealed more about the reality return of the series in a press release.

“Season three of the award-winning series, CRIKEY! IT’S THE IRWINS, makes its linear debut to Animal Planet on Saturday, June 5 with an all-new season featuring re-openings and rescues as the Irwin family continues Steve Irwin’s mission to bring people closer to animals and inspire them to become Wildlife Warriors to help protect and preserve our environment and its animals. The new season first kicks off with the CRIKEY! IT’S A BABY! special at 8PM ET/PT and includes poignant and intimate moments leading up to the birth of Bindi and Chandler’s daughter, Grace Warrior Irwin Powell.

It’s truly an Irwin family affair in this CRIKEY! IT’S A BABY! special when Terri and Robert Irwin do all they can to help Bindi and Chandler while the family continues their wildlife conservation efforts. Linear audiences will see Terri throwing a baby shower, compete with animals, games, and Chandler’s parents attending via zoom from the U.S.; Chandler giving Bindi an emotional surprise after she finishes her last day of work at the Australia Zoo Wildlife Hospital; Robert proving he is worthy of his new nickname – Funcle, the funnest Uncle of all time – by using his dog Stella to demonstrate his baby caring skills; Bindi and Chandler preparing their overnight bags for their upcoming trip to the hospital; Robert providing updates from the hospital waiting room; and Bindi, Chandler and their daughter coming home to Australia Zoo where they are welcomed by the entire Australia Zoo family.

Season three of CRIKEY! IT’S THE IRWINS joins the Irwins as they try to continue their mission during the global pandemic and Terri delivers the much-anticipated news that Australia Zoo will finally reopen after being closed for 78 days due to COVID-19. Bindi and the team at the wildlife hospital find themselves in a desperate race to save a dozen corellas and Robert witnesses the incredible birth of three tiger cubs.

Prior to the challenges of the pandemic, Australia faced devastating bushfires that wreaked havoc on the country’s landscape and wildlife population. The Irwins efforts to help as many animals as possible are the focus of a special episode. This season will also follow personal family milestones as newlyweds Bindi and Chandler prepare to welcome their own little Wildlife Warrior to the world, and Robert learns how to drive with the help of Terri and Bindi in his dad’s iconic old ute.

Other CRIKEY! IT’S THE IRWINS stories this season include Terri and Robert secretly trying to guess the sex of Bindi’s baby, while Bindi and Chandler have their own surprise in store; Bindi and Terri assisting the zoo’s dedicated vet team as they treat a multitude of animals at the Australia Zoo Wildlife Hospital; Robert continuing his father’s legacy as he faces off with Bosco, the most aggressive crocodile at Australia Zoo; Chandler stepping up during the croc show for Robert when an injury prevents him from participating; and Bindi and Chandler studying coral bleaching on the Great Barrier Reef. Additionally, four beautiful Sumatran Elephants arrive to Australia Zoo from Indonesia, fulfilling a dream that began over 30 years ago when Steve and Terri decided to fight for the survival of this critically endangered species.”

Check out a trailer for Crikey! It’s the Irwins season three below.

What do you think? Are you a fan of this reality series? Do you plan to watch Crikey! It’s the Irwins season three on Animal Planet?

What happened to Robert’s arm?

If you’ve been waiting for Animal Planet to air Season 3 of Crikey! It’s the Irwins, your time has come. It began last week, S3 E1 (6/4/2021) and tonight S3 E2 aired. Beware mislabelled cable listings. Tape the Extra Bites segments. Tape everything SATURDAY nights (in the States) just in case. Repeats overnight as always in case you missed it. ignore the Tuesday shows, unless you missed the earlier seasons or want to watch again.

Look forward they but regular tv ridiculous put on Discovery plus so good the crocodile hunter kids are the best like he did. Missed old shows on air really good reality tv shows when everything was better things on.

Yes I’m so glad this’ll be on Animal Planet. I love the Irwin’s and I was worried that I’d have to cave in and have to sign up for Discovery Plus in order to watch them. Steve would be so proud of his family.

Awesome thanks for the memories of our Aussie mate Stevie Irwin ⭐⭐

Thank you goodness going to be on both platforms awesome news. Great update grew up with this crocodile hunter Steve Irvin should be proud of his career and his kids pass the torch to him.