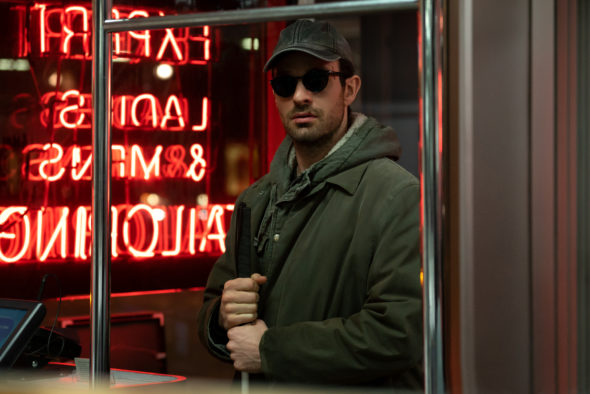 Should the man without fear be afraid? Is Marvel’s Daredevil TV show cancelled or renewed for a fourth season on Netflix? The television vulture is watching all the latest TV cancellation and renewal news, so this page is the place to track the status of Marvel’s Daredevil, season four. Bookmark it, or subscribe for the latest updates. Remember, the television vulture is watching your shows. Are you?

A Netflix superhero drama and part of The Defenders TV show franchise, Marvel’s Daredevil stars Charlie Cox, Deborah Ann Woll, Elden Henson, Ayelet Zurer, Vincent D’Onofrio, Royce Johnson, Amy Rutberg, and Geoffrey Canton. Based on the Marvel Comics character, the series centers on Matt Murdock aka Daredevil (Cox), the blind superhero with heightened senses and abilities, who is known as the man without fear. Although he founded a law practice with friend Foggy Nelson (Henson), Murdock also fights for the citizens of Hell’s Kitchen whose troubles lie outside law enforcement’s reach.

Unless they decide to publicize viewership, it is difficult to predict whether Netflix will cancel or renew Marvel’s Daredevil for season four. For now, I’ll keep an eye on the trades and press releases and update this page with breaking developments. Subscribe for free Marvel’s Daredevil cancellation or renewal alerts.

11/30/18 update: The Marvel’s Daredevil TV series has been cancelled but there have been hints that the series or characters could return. Details here.

What do you think? Were you hoping that the Marvel’s Daredevil TV show would be renewed for a fourth season? Are you sorry that this Netflix series was cancelled instead?

I would be so disappointed if Daredevil were cancelled. Season 3 is so so good. Why cancel a show that’s doing so well.