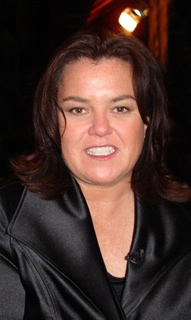 Often controversial host Rosie O’Donnell is looking to return to daytime as an option for local stations when The Oprah Winfrey Show leaves the airwaves.

O’Donnell hosted her first daytime program, The Rosie O’Donnell Show, from 1996 until 2002. It won numerous awards, including five consecutive Emmys for the host. Episodes of the feel-good chat series focus on celebrities, Broadway shows, children and charitable organizations.

After being off the small screen for five years, she returned as a co-host of The View and brought lots of politics and opinions into the “hot topic” discussions. The ratings went up but that stint only lasted one year due to her not being able to come to a consensus with ABC on the length of a new contract.

Most recently, O’Donnell has been hosting Rosie Radio, a daily two-hour show on Sirius XM Radio.

Now, O’Donnell is looking to return to television on a regular basis and is partnering with syndication veterans Dick Robertson and Scott Carlin who worked on her 1990s show. Robertson worked as the president of Warner Bros. Domestic TV Distribution for 17 years. Carlin worked under Robertson for almost 20 years before spending time as the head of HBO Domestic Distribution.

It’s too early to tell but, with the talented team behind it, a new Rosie O’Donnell show could very well be the hot contender to replace Oprah in the fall of 2011.

What do you think? Would you be interested in watching a new O’Donnell daytime series? Do you think it would get big ratings or a quick cancellation?

I giver her 1 week before she puts her foot in her mouth once again. Absolutely an annoying person.

Don’t bring Rosie back. She is aloud mouth who doesn’t think before she shoots off her big mouth. She thinks she is entitled to hurt anyone she pleases who doesn’t believe the way she does. She has a big chip on her shoulder and always looking to start a fight. Bring back Bonnie Hunt she has a heart for everyone.

No do not bring her back. Rosie has proven she can be very rude and heartless. Bring back Bonnie Hunt. She is good for the soul.

No one seems to be able to last, what makes us believe Rosie can? I always enjoyed her show as well as Tony Danza and Bonnie Hunt, but I guess when the public likes something, it’s time to get rid of it. Yet you keep folks like Jerry Springer on the air, now with a game show that could not be dumber or less interesting. Tell me why anyone wants to watch people air their disquisting dirty laundry this way. A woman actually went on national tv to tell a man she’s never met that when she laughs she wet’s… Read more »

Another reason to listen to music. Rosie is obnoxious, loud, mean spirited and not all that bright. Only a network who wants to shoot themselves in the foot would put her on their stations. I never watched The View simply because Rosie sat on the panel. She rants and raves without substance! She offers nothing of interest to me and I will boycott any network that hires her. She’s the female Rush Limbaugh, she’ll keep up the trash talk as long as someone will pay her.

Grown ups and thinkers will find her very enjoyable I’m sure. Can’t wait!

Rosie is a ranting mean lunatic. NBC is killing itself. The only show worth watching on that channel is the Bonnie Hunt show.

I would love to see Rosie on the air again…btw do people realize that she is the one who started the trend to give the audience members presents?

Forget Rosie ,and leave Bonnie Hunt show on the air, Rosie had her day, besides Bonnie is like a breath of fresh air Jean

I will watch be I LOVE RO!
I wonder will Ro ratings’s compete w Ellen?
Ellen’s is the current “queen of nice”[ while Ro is the ORIGINAL]
Ellen is the current “tv fav lesbian”.

I loved her previous show, but I believe since then she has burned too many bridges with her rude behavior and somestimes bizarre rantings. People want to turn in to watch someone everyday that feel like is a friend, not the odd “aunt” that everyone in the familt tolerates

I think it will be great to see her back on television, I remember watching her on her own talk show back in the 90’s, and seeing her on The View from 2006-2007. I hope it will happen, and I will miss The Oprah Winfrey Show.