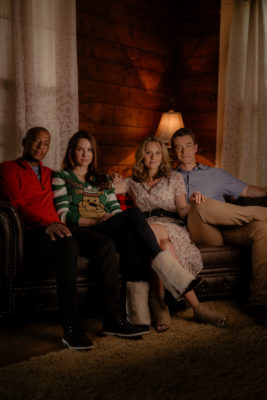 Are you a fan of One Tree Hill? Lifetime just announced several stars from the CW series will reunite for the upcoming TV movie, The Christmas Contract.

The holiday movie, which stars One Tree Hill cast members Hilarie Burton, Robert Buckley, Danneel Ackles, Tyler and Antwon Tanner, will be accompanied by a cast reunion that promises a few “surprise guests.”

The Christmas Contract premieres on Lifetime on November 22nd at 8 p.m. ET/PT, followed by the One Tree Hill reunion at 10 p.m. ET/PT.

It’s Jolie’s (Hilarie Burton) first time going back home to Louisiana since her devastating break up with Foster (Hunter Burke). Seeing him is inevitable as their parents run the town’s annual Christmas Market together, but when she discovers Foster is bringing home a new girlfriend, Jolie cannot bear the thought of going home alone and seeing them together. Her best friend Naomi (Danneel Ackles) suggests that Jolie bring her flaky brother, Jack (Robert Buckley), home for Christmas as he has no plans this year. Jolie, a professional web designer, is hesitant; so, Naomi, a lawyer, creates a Christmas contract to give them both something they want—a buffer for those awkward moments around Jolie’s ex and a website to help sell Jack’s upcoming novel. Unbeknownst to them, the Christmas contract proves to be so much more than what they signed up for. The Christmas Contract is produced by Active Entertainment. Ken Badish and Daniel Lewis serve as executive producers. Monika Mitchell serves as director with a script by Cassie Doyle.

The Tree Hill Ravens are back together to celebrate the Christmas season on Lifetime. In this special one-hour reunion, Hilarie Burton, Tyler Hilton, Danneel Ackles, Antwon Tanner of The Christmas Contract and Stephen Colletti of Hometown Christmas, reunite for a special evening that will include a few surprise special guests. ‘Tis the Season: A One Tree Hill Cast Reunion is produced by A+E OriginalsTM. Steve Ascher, Kristy Sabat and Allie Breslin serve as executive producers. Brie Miranda Bryant executive produces for Lifetime.

What do you think? Are you a big fan of One Tree Hill? Will you watch the reunion special?

hi..and i would definitely watch the One Tree hill christmas contract and the reunion after!