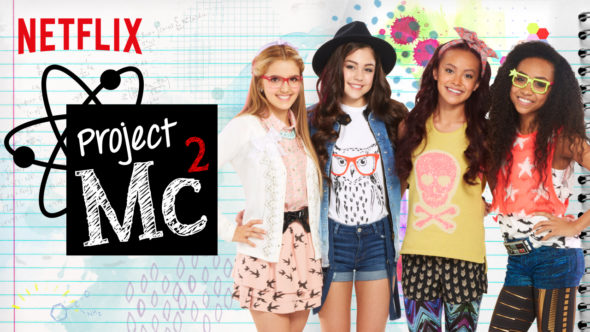 The Quail (McKellar) is not only NOV8’s chief intelligence officer, she is also McKeyla’s mom. She issues assignments to McKeyla, via the girl’s Advanced Digital Intelligence Spy Notebook (A.D.I.S.N.), i.e. Addison (Mabie).

Despite McKeyla’s objections, the Quail recruits Camryn, Bryden, and Adrienne into NOV8. She explains McKeyla’s latest mission is to protect the “totes adorbs” British Prince Xander (Marziale), who is about to embark on a journey into space.

Working together, these young scientists save the day, all the while proving that smart is the new cool.

What do you think? Do you like the Project Mc2 TV series? Should this TV show be cancelled or renewed for another season on Netflix?

Please keep this series going I am sooo in love with it and it’s so amazing and so inspiring. I got the Curcuit Beat set then I learned that there was a series on Netflix so I checked it out right away and now I am so attached to it. I love everyone in the show. Personally this has to be my most, ever, favorite of all time series. I keep on thinking about it!!! I really wanna know what happened after :l . I actually had dreams of there being season 20. Project MC2 has many supporters and lovers… Read more »

Please keep it going! I love the series and if it ends I’ll be so sad . I want it to be ongoing and continue for at least till there’s a 20th season…. I know that’s a lot but it’s so good and I really like the characters! Just wanted to state that my fav character is Mkeyla (idk if I spelled it right) but I still love all the other characters! Please continue! Project Mc2 has many lovers!

Project mc2 should not be cancelled cause I love it and tweens like me are inspired by the amazing things the girls can do, personally I want to be a culinary chemist because it looks really cool and interesting. It also shows that you shouldn’t always rush things and scream and jump for joy because you can’t work things out like that. It is so inspiring and fun to watch it shouldn’t be cancelled or mine and many other tweens hearts will be broken.