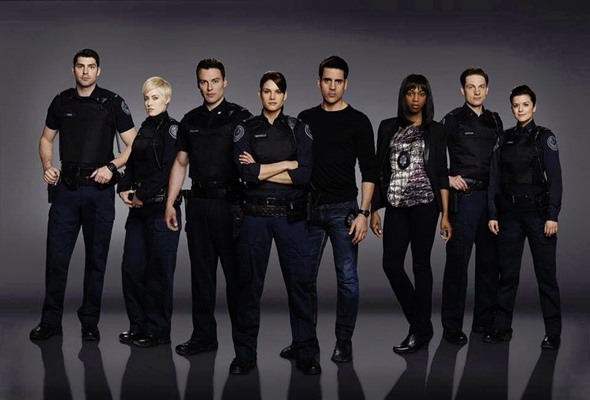 Rookie Blue has been cancelled after six seasons on ABC. There will not be a seventh season. Variety reported on the cancellation of the Canadian series starring Missy Peregrym and Gregory Smith on Friday.

Ilana C. Frank released a statement about the cancellation of the series:

“On behalf of the whole Rookie Blue family, thank you to all the fans for your dedication over the last six years. After six fun and dramatic seasons, our story has come to its natural close. Alongside you all, it has been our privilege to watch [Missy Peregrym’s character,] Andy McNally develop from a young rookie to a distinguished officer. On behalf of eOne and ICF Films, I want to recognize the talented Missy Peregrym, Ben Bass, Greg Smith and the entire ensemble cast and crew who worked passionately and tirelessly to bring the characters and stories to life. Thank you to our broadcast partners Shaw Media and ABC for all of your support. As we say goodbye to 15 Division, the ICF Films team is already underway on our next project with eOne and Shaw Media and we are looking forward to sharing more exciting news in the near future.”

Are you sad to see Rookie Blue cancelled? Did you enjoy watching this show on ABC? Tell us what you think.

Not happy at all! I loved rookie blue!

I’ve watched Rookie Blue which is on abc Friday nights and looking forward to the next episode even if I have to record the show
on my dvd so I could watch the show the next day.

I agree there are so many more stories to be told on Rookie Blue and I’m sure if another station – may ion would pick it up their ratings would prove that Rookie Blue could carry on.

I can’t believe it that abc did not renew Rockies Blue
Because of that I use to watch the show
Whey did abc cancel Rookie Blue was the reason
The rating when down.

I love Rookie Blue and I am saddened that it has been cancelled. I don’t understand how they can keep some sucky shows like Dr. Ken and really…the Muppets, are we 2. I just hope they keep Blood and Oil or I’m done with ABC ( which I watch the most.) !!!!

I can’t believe ABC did not renew Rookie Blue for another season it is a great and has been a great show I look forward to watching it every week I hope that maybe another station picks it up because Rookie Blue in my eyes is number 1 dislike a lot of the other shows are like NCIS and NCIS LA NCIS New Orleans they’re all number one so come on bring back Rookie Blue.

As far as I’m concerned they have been deleted from my line up. Did they really think Quantico would be the new Rookie Blue. The actors are boring and the story line is aggravating. Hopefully, some other station will see a real rating booster and pick up this series.

Rookie Blue was a show that I watched it was
crazy that abc didn’t renew the show.

Rookie Blue was the best show they watch in the long time I cannot believe that you not renewing it for another season you really let me down and a lot of other people down.

ABC YOU SUCK BIG TIME CANCELLING ROOKIE BLUE. CANCEL 2 MORE SHOWS AND I’M DELETING YOU FROM MY CHANNEL LINE UP.

Rookie Blue was a great show I watched the show
when the show was on the air with abc.