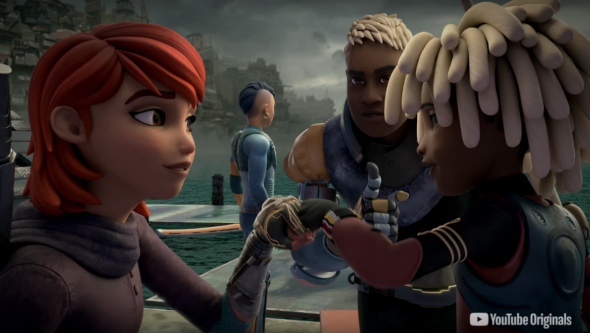 Some big names are coming to YouTube. The streaming service just announced the cast for their upcoming TV show, Sherwood.

LOS ANGELES — February 28, 2019 — YouTube revealed the full list of star voices for SHERWOOD, an animated series set in the dystopian future of 2270. Based on the mythology of Robin Hood, the series follows 14 year-old Robin and her friends’ battles with the wealthy Upper City in their efforts to overcome inequality and fight for justice. SHERWOOD will be available on YouTube Premium on March 6, 2019.

“In this modern telling of Robin Hood, Robin is a girl and she uses technology and code to battle the sheriff of Sherwood. Together with Google’s Computer Science in Media team, we convened an advisory council comprised of thought leaders from organizations across Google. Together we imagined a world of the future and what it meant for design, travel, technology and society,” said Nadine Zylstra, Head of Learning, YouTube Originals. “Sherwood is new series set to inspire young women and girls on their role in technology of the future.”

“We are thrilled to partner with YouTube to bring our first original concept to life. We hope that Robin and our ensemble cast from far flung parts of the world inspire kids to know that they can and will make a difference and impact the future through problem solving, creativity and teamwork,” said Diana Manson, Owner, Baby Octopus.

What do you think? Are you a fan of the Robin Hood story? Will you check out Sherwood?

Please! Will there be a second season?!!!! Did Robin die? Where is King Richard? Where is Gizborne Going? What HAPPENS? You must finish this amazing show! Or I might just die!!!!!!

Please say whether there is another season or not.it’s really a mind blowing series

Is create another episode I’m dying to know what happens is Robin alive? What about iniko? The King? Do they kiss???

My kid loves the show. It is remarkably reminiscent of the Shadows of Sherwwod by Kekla Magoon. Remarkably.

Really enjoyed this series. Started a bit slow but finished big. Looking forward to seeing what happens to the characters.

This was such a cute little story. Even as a 52 year old adult male, I still found it an enjoyable little tale. It’s a refreshing break from all the curse words and politics that have destroyed TV and entertainment today. The characters are just so adorable. Please create a Season 2. I want to know if Robin survives.

I Love this show SO much I started watching it and finished it in the same day! I even re watched it the next day because I couldn’t get enough. I love this show so much I cant get it off my mind! The second I finished the last episode I went strait to researching when the next session was coming out, Please Do not cancel this show!

please dont cancel the series i really want to know if Robin is alive i hope she is! its a great series adventure, mystery’s, relationships everything in it sounds so Amazing! please make more really love the series keep up the good work!

Please whatever you do! I beg you not to cancel the show, and too keep making more. I need to known what happens. I literally have only bean watching this show for only 2 days! And I.m hooked. It’s one of my favorites and I have fallen in love with the characters. Please don’t let this turn into all the others I’ve watched. It’s good and I love it then it gets cancelled and breaks my heart. Please continue.

Holy hand grenades batman. A 14 her old girl fighting against the wealthy upper class to defeat inequality, somehow loosely based on robin hood? This premise is loaded to the nines with red flags of nonsense and the checking of check boxes to ensure this is a “modern” enough show.

And they see fit to try and drag the name of robin hood, even if loosely, through the mud to trick some folks into giving it more than a passing glance.

there is no need to be sarcastic and rude, the show was good and whether you liked it or not many people worked hard to create it and it deserves respect at the least and not sarcasm and cynicism. if you want to talk that way write and produce a better story yourself.

No one is forcing you to watch it mate. Me personally found it refreshing and good and I hope there will be 2nd season. I think world has enough negativity in it already and it would be so much better if people would keep their bitter and poisonous comments for them self.