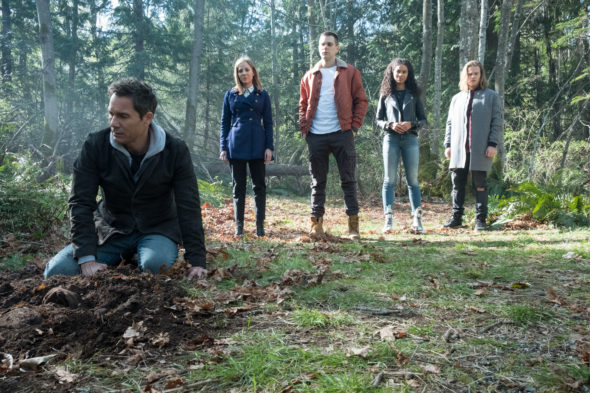 Every journey must come to an end, even if you’re a special operative trying to save humanity from destruction. Today, Netflix cancelled its Travelers TV show after three seasons. Star Eric McCormack has released a video, announcing that the show would not return for a fourth season. He did offer up the tiniest sliver of hope for fans, saying, “Who knows what the future holds,” and adding, “Travelers ‘Program One’, as we call it, is complete.” Check it out, below.

A Netflix sci-fi mystery, Travelers also stars MacKenzie Porter, Nesta Cooper, Jared Abrahamson, Reilly Dolman, Patrick Gilmore, J. Alex Brinson, Leah Cairns, and Jennifer Spence. The drama unfolds in a post-apocalyptic future, in which special operatives known as “travelers” go back in time to save humanity from destruction. Unlike much time-travel fiction, there is no time machine involved. Instead, a traveler transfers his or her consciousness into the body of “target” just prior to that person’s death, then uses the person’s identity as a cover, while carrying out secret missions.

McCormack’s co-star, MacKenzie Porter, as well as creator Brad Wright, and producer Carrie Mudd also addressed the end of the Travelers TV series, via social media. Check out their tweets:

Thank you from the bottom of my heart. You guys have changed my world. Marcy will forever be a part of me. 3569, signing out. ❤️ pic.twitter.com/C5eUoWGf4b

Thanks to the greatest cast, crew, directors, writers, artists and producing partners a guy could ask for. Love to you all. And to @Netflix for stepping up so we could make season 3! @Carrie_Mudd @EricMcCormack @TRVLRSseries #bestfansever

What do you think? Have you watched all three seasons of the Travelers TV series? Are you disappointed there will be no season four on Netflix? Sound off in the comments.

I believe this series could’ve Gomez on for at least 1-2 more seasons. It was very entertaining and engrossing. I believe Netflix made a mistake in canceling the series.

Noooo! Why!?!? I should’ve known when David died it would be ending but I continued watching after 1st episode because I saw 3 seasons which is usually a great sign for more seasons but ugh!!!! I wish I’d never kept watching without checking this now. Sucks!!! Marcy & David favorites. Makes me cry more than one. Trevor also favorite.

Hopefully someone who has some intelligence will change their mind and renew Travelers for a fourth season. Wonderful acting, great cast.

Just binged all three seasons of Travelers – loved it – great acting and storytelling. This has been the best Netflix series so far in my opinion. Very sorry to see it end.

Why is Netflix acting like ABC,NBC all other chanels canceling good programs .

So very sorry that the show has been cancelled. Would love to know why. Any chance for a Netflix movie: Travelers, Program 2?

I have so loved this series and have totally fallen in love with the characters! We seldom watch TV and were thinking of cancelling Netflix, until we started watching Travelers! If no season 4 and beyond— maybe it’s time to give Netflix the ax!

I have seen all three episodes and really like it a lot. I am very disappointed that there will not be a season four. Would like to see it come back.

Nooooooo. Traveler program 2 I was looking forward to you !! Amazing show.

Incredible show that should continue forever. Quite sad.

I hate that this show has ended, much love and thanks. To all involved in this show thank you it was awesome. Sorry to see it end.

Very disappointed! It was a very creative show with compelling characters and great twists. I wanted to see them “try again”….

I really enjoyed the show. Hoping they bring it back!

Travelers is the best SciFi drama since the 21st century remake of Battlestar Galactica. I can’t believe Season 3 is the last. Something is horribly wrong with that!