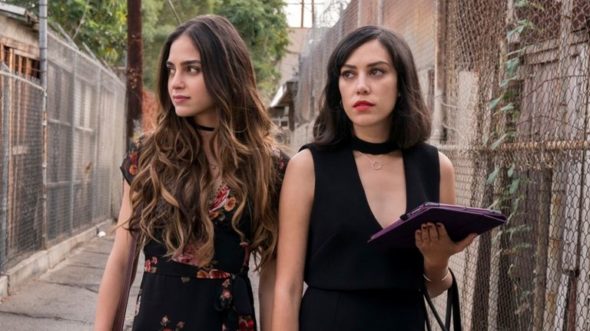 It turns out that the end is near for the Vida TV series. It’s been revealed that the Starz drama will end with the upcoming third season.

Based on the short story, Pour Vida, by Richard Villegas, Jr., Vida stars Mishel Prada, Melissa Barrera, Ser Anzoategui, Carlos Miranda, Chelsea Rendon, Maria-Elena Laas, and Roberta Colindrez. The series centers on two estranged Mexican-American sisters from the Eastside of Los Angeles. When tragedy brings them back together, Lyn (Barrera) and Emma (Prada) have to face the truth about their past, their mom, and themselves.

Despite the very low ratings, Vida was renewed for a third season back in May 2019. Season three is scheduled to debut on April 26, 2020.

Today, Starz announced that the third season will also end the program. The cable channel included a video teaser.

What would familia be without a little drama? The final season of #VidaSTARZ returns April 26 on @STARZ. https://t.co/QTFjCPWCth pic.twitter.com/AeqCfQ8Zsk

In addition, Tanya Saracho, the show’s creator, showrunner, and director, penned a letter to say goodbye.

“I have not been able to write this letter — every time I try my palms get sweaty, my heart does a cumbia beat and I get nauseous. It’s taken me days. Because no matter how you slice it, this is a farewell letter. So I’ll get that part out of the way: Season Three will be ‘Vida’s’ final season. Rather than dwell on the ‘hows’ and the ‘whys,’ what I’m burning to get to is the ‘thank-you’ part. That’s the part that’s making my chest ache.

“When I began this journey three and a half years ago, I never dreamed that by the end of the process I’d be so wholly changed — mind, body, and spirit — and that I’d be standing so strongly in my abilities to run and create a TV show the way it should have always been created: By us. When I started this, the landscape was a bleak one for Latinx representation. In the television landscape, the narratives about us were few and far between and were stuck on stereotypical. And I had only heard of one Latina showrunner who’d been allowed to run a show solo. Also for brown queers, there was truly no representation.

“This is where the thank-yous begin: Because you championed our delicate and darling little series, we were gifted three beautifully compelling, trailblazing seasons of television. Sincerely, this is why I wanted to personally write this letter, to express that your support has meant everything. It has meant two renewals and validation that our brown narrative is worth telling. I will never be able to thank you enough for your reception and endorsement. Truly.

“This goodbye is too bittersweet for words. I’d be lying if I said I’m not sad about not getting back into that magical writers room to keep crafting our story. But after all, I got to tell the exact story I wanted to tell, exactly how I wanted to tell it, and that is rare in this industry. I leave steeped in gratitude. Thankful to Starz for not just allowing ‘Vida’ to happen, but for being great co-parents as we raised her together. And grateful for the collaborators whose careers we were able to launch: Latinx cinematographers, writers, actors — almost entirely female — who are now out there and in demand. What a beautiful family we built. And what a beautiful show.

“Mil gracias. I do hope you’re able to give this, our last season, a good send off, because let me tell you, it is a powerful one. It is just as compelling as ever with some imagery and themes I’ve never seen on television before. I’m profoundly proud of it.”

What do you think? Have you watched the Vida TV show? Are you sorry to hear that there won’t be a fourth season?

I feel terribly let down that no season 4 is in the making. Vida was an excellent show. The imagery, culture, and yes the sex all made it the show to watch. I will miss it

I absolutely love Vida and so very sad it has been cancelled. I don’t know who makes these decisions but they obviously don’t care about the viewers. I am a married, heterosexual 70 yr old woman and Vida was one of the best shows on television! Shame on Starz!

I loved this show and am disappointed it was canceled.

Very disappointed no season4. It seems like movies & tv are so shady these days. Then when you have a good series or tv drama series like vida, humans, colony ect, they are cancelled when they should progress.
Vida was interesting, intriguing and left you curious about what will happen in their life.
Really irritated to see it go.

We are heartbroken to read that Vida had been cancelled. We Love this show the actors and the writing. This show exposed us to the language and the music and culture of the Hispanic and Latina Community. We enjoyed the story telling of family and womanhood. There is NO other show like this. The women that are behind the scenes sharing their own personal experiences makes this show SPECIAL. We hope that the network would reconsider. We pray that we will see Vida on another network one that appreciates what a show like Vida brings to the table. The wonderful… Read more »

Having just discovered this marvelous show, I am disappointed to learn that it has been canceled. I grew up in The Rio Grande Valley of South Texas and many of the show’s themes are near and dear. I look forward to watching the final season and wish that Showtime would have a change of heart and reconsider.

Having just discovered the marvelous show, I’m saddened to learn that it has been canceled. I grew up in The Rio Grande Valley of South Texas and many of the themes of the show are near and dear. I look forward to this final season but wish that Showtime would have a change of heart.