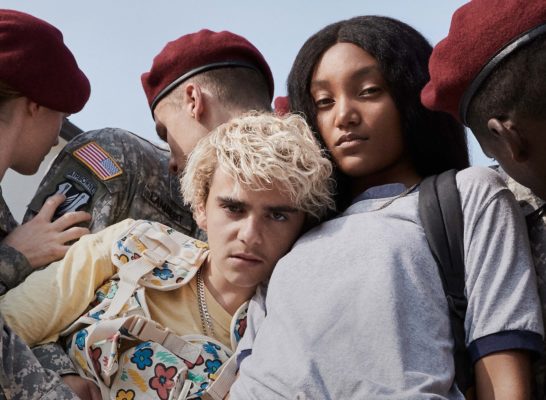 The story of Fraser and Caitlin appears to be over. While the We Are Who We Are TV show isn’t exactly cancelled, HBO has confirmed that there’s no second season in the works. However, the show’s creator wants to make more.

A dramatic series from Luca Guadagnino, We Are Who We Are stars Chloë Sevigny, Jack Dylan Grazer, Alice Braga, Jordan Kristine Seamón, Spence Moore II, Kid Cudi, Faith Alabi, Francesca Scorsese, Ben Taylor, Corey Knight, Tom Mercier, and Sebastiano Pigazzi. The story follows two American kids who live on a United States military base in Italy. The series explores friendship, first love, identity, and all of the messy exhilaration and anguish of being a teenager. Shy and introverted, fourteen-year-old Fraser Wilson (Grazer) moves from New York to a military base in Veneto with his mothers, Sarah (Sevigny) and Maggie (Braga), who are both in the U.S. Army. Meanwhile, Caitlin Poythress (Seamón) is seemingly bold and confident. She’s lived with her family on the same base for several years and speaks Italian. Compared to her older brother Danny (Moore II), Caitlin has a closer relationship with their father, Richard (Cudi), and does not communicate well with her mother Jenny (Alabi).

Airing on Sunday nights, the first season of We Are Who We Are averaged a 0.01 rating in the 18-49 demographic and 72,000 viewers. It’s one of the channel’s weakest performers in the traditional ratings but pay-for-view cable channels rely on those less than other outlets.

A co-production of HBO and Sky Atlantic, the series aired for eight episodes, from September until November of 2020. We Are Who We Are seemed to have come to a natural conclusion but could also return for season two.

We now know that more of the series isn’t likely in the cards, at least in the immediate future. When asked about the series when talking to THR, HBO’s content chief, Casey Bloys, shared, “[We Are Who We Are creator] Luca Guadagnino is off doing other projects, so I don’t know. There are no plans at the moment for season two.”

Among Guadagnino’s numerous other future projects are to direct a narrative feature adaptation of the 2017 documentary Scotty and the Secret History of Hollywood, a new version of Scarface written by the Coen brothers, and a new adaptation of the Lord of the Flies novel. A sequel to the Call Me By Your Name movie has also been discussed. It’s not known how recent allegations about star Armie Hammer will affect plans for the latter.

Last year, Guadagnino expressed hopes of returning to explore more of the We Are Who We Are characters’ relationships. He said:

“Me and my beautiful writers, we already wrote a Bible for the second season,” he said, referencing co-creators Sean Conway, Paolo Giordano, and Francesca Manieri. “But we have to see. We did it because we were locked down [during the pandemic], and we didn’t want to waste our time. In lockdown, making Zoom calls, we thought about the characters and we came up with something [for Season two]. We’ll see. I’m very curious to know how this is received. You can see that this is a very dear project to me. I feel it as something very close to me, and I’m very happy that I’ve done it. So if HBO and Sky would be game for making the great cast return to their great characters, I will be there.”

What do you think? Did you enjoy the We Are Who We Are TV series? Would you watch season two on Sky Atlantic or HBO?

I’m also a senior and would love to see a season 2!

…a shame if it can’t, on some platform, return.

Hello this really sucks I was really looking forward to this show returning for season two. Why do shows like “The Firm ” Really sound interesting then get canceled by ********. “We Are was a interesting story about the relationship between two beautiful people who are living in another country and dealing with the struggles of LGBT issues.

We are who we are was a great serie with good actors. I saw by HBO. Please, return with the season 2!!!!!!

Absolutely thought this was one of the best series of last year. I keep hoping for a season two. This show was definitely overlooked for the Emmys, etc. Loved the mix of Italian and American culture, army vs. civilian, older vs younger, sensuality, music, and above all the characters. Refreshing to say the least.

Found first season of We Are Who We Are interesting and would like to see more of these interesting characters and story development. Would definitely tune in to another season

I need (at least) one more season. I love this show

Fantastic. Guadagnino is a master craftsman. So much more to explore in these characters.

This was such a beautiful story/work of art. I would love to see a season 2.

This show was absolutely beautiful. The cinematography, the writing, the acting, the connection between the characters, the score (or soundtrack), it was one of those moments in time where everything comes together perfectly and something bigger than itself is born. I think back on the show and it truly moved me. I was that young boy Fraser. I knew those people in the story. I had friends just like them, but also so different. I know those parents. I know that feeling of those scenes when the party is over and there is that lingering thing in the air. It’s… Read more »