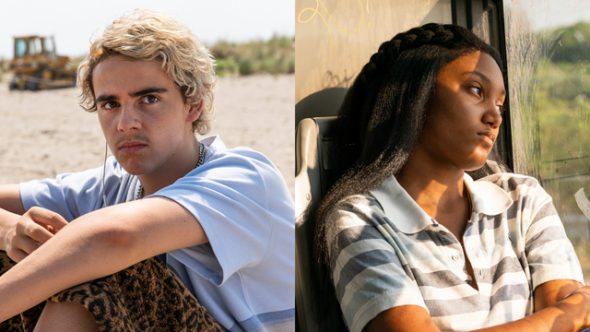 TV show description:
A dramatic series from Luca Guadagnino, the We Are Who We Are TV show is the story of two American kids who live on a United States military base in Italy. The series explores friendship, first love, identity, and all of the messy exhilaration and anguish of being a teenager.

Shy and introverted, fourteen-year-old Fraser Wilson (Grazer) moves from New York to a military base in Veneto with his mothers, Sarah (Sevigny) and Maggie (Braga), who are both in the U.S. Army. Jonathan Kritchevsky (Mercier) is Sarah’s assistant.

Meanwhile, Caitlin Poythress (Seamón) is seemingly bold and confident. She’s lived with her family on the same base for several years and speaks Italian. Compared to her older brother Danny (Moore II), Caitlin has a closer relationship with their father, Richard (Cudi), and does not communicate well with her mother Jenny (Alabi).

Caitlin is the lynchpin of her group of friends, which includes outspoken and sexually uninhibited Britney (Scorsese); cheerful and good-natured Craig (Knight), a soldier in his twenties; Caitlin’s possessive boyfriend and Craig’s younger brother, Sam (Taylor); Enrico (Pigazzi), a playful eighteen-year-old from Veneto, who has a weak spot for Britney; and Valentina (Barichella), an Italian girl.

Series Finale:
Episode #8 — Right Here Right Now #8
In honor of her last day in Italy, Caitlin and Fraser sneak off to catch a concert in Bologna. Along the way, Fraser finally feels comfortable admitting a shocking secret about Mark and finds a new friend in Luca before he and Caitlin spend their final moments together in the most beautiful place on earth.
First aired: November 2, 2020.

What do you think? Do you like the We Are Who We Are TV show? Do you think it should have been renewed for a second season?