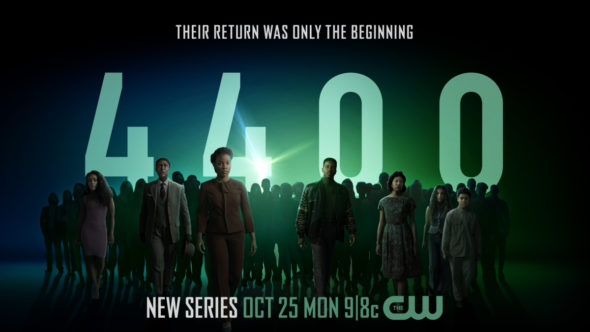 The 4400 TV show ran on USA Network for four seasons and was cancelled before it could get a proper conclusion. Now, 14 years later, The CW has rebooted the series. Will this version last any longer or, have a proper ending? Will 4400 be cancelled or renewed for season two? Stay tuned. *Status update below.

A science-fiction mystery drama series, the 4400 TV show stars Brittany Adebumola, Joseph David-Jones, Ireon Roach, TL Thompson, Jaye Ladymore, Derrick A. King, Khailah Johnson, Cory Jeacoma, Amarr, and Autumn Best. Over the last century at least 4,400 people who were overlooked, undervalued, or otherwise marginalized vanished without a trace off the face of the planet. One night, they are all returned to a location in Detroit not having aged a day and with no memory of what happened to them. As the government races to understand the phenomenon, analyze the potential threat, and contain the story, empathetic social worker Jharrel Mateo (David-Jones) and hardened community corrections officer Keisha Taylor (Roach) are among the civil servants called upon to deal with the uncanny refugees. The new partners clash in ideology and approach, but gradually find they have more in common than they thought as they become familiar with those under their care. These unwilling time travelers, collectively dubbed the 4400, must grapple with their impossible new reality, the fact that they’ve been returned with a few “upgrades”, and the increasing likelihood that they were brought back now for a reason they’re only beginning to understand.

2/15 update: You can see the latest night’s ratings in context.

What do you think? Do you like the 4400 TV series on The CW? Should it be cancelled or renewed for a second season?

I actually like to this show a lot more than some of the other viewers did. I was a big fan of the original series, which I have a copy of, and I’ve watched it many times. I like the fact that this version is not all white, like the original one was — and for the record, I’m an old white dude. I think it’s wonderful that CW is casting so many series in a more inclusive way. I think that part of the problem is that there was a mystery in the first version of The 4400, but… Read more »

As a super fan of the orginal to me this is not 4400 and I think that’s its biggest failure it could have done ok and not had such abismsol ratings had it not been banned 4400 or had they been honest about what the reboot was going to be. It’s just not 4400 at all imo

Know your audience CW. Do better in promoting this show so it can at least stay on as long as Black Lightning did! The material here is good. Continue to develop and promote it to your target audience.

Not even a 0.1 average. How could they bring this back? It’s embarrassing.

Ikr!! And it’s not 4400 maybe had they named it something different it would have done better but everyone going in expecting a 4000 reboot was disappointed before the first episode even ended

Might be one the worst shows and probably the worst reboot of TV history.. I cannot comprehend how this script & plot are approved.. makes you think there are no more sane producers around..

I’ve watched the first 6 episodes and I’m out. I loved the original so I was hoping the reboot would follow a similar format but nope. By focusing so much on such diverse characters and NOT why they were abducted or how they’re integrating back into society the story is non-existent. I no longer care. The original series had people back out in the world (but monitored by the government) by the end of the 2-part pilot.

I love the first one have watched it multiple times but I couldn’t even finish the pilot of this so called reboot. They shouldn’t have even been able to use the title

I’m surprised it hasn’t already been cancelled and taken off the air. It’s a train-wreck.

I will be surprised if it survives passed season 2. Not even close to how good the original was. I had high hopes for the reboot, I really wanted a conclusion. But it is just bashing us over the head all episode long with progressive talking points and there is no care about the plot. The writing is awful and it shows that diversity and continued division is what was cared about more than the actual show. Even worse than most CW shows….that is saying a lot.