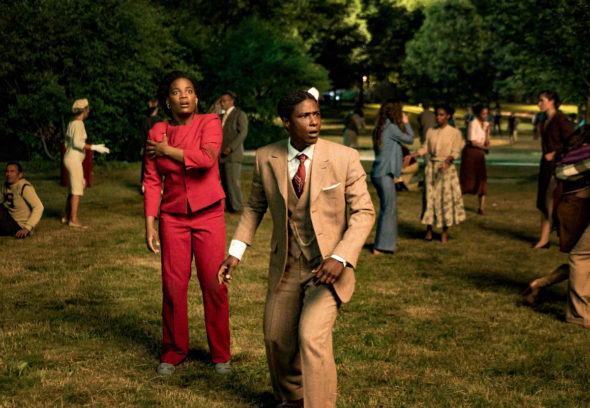 Will this reboot run longer than the original? Has the 4400 TV show been cancelled or renewed for a second season on The CW? The television vulture is watching all the latest cancellation and renewal news, so this page is the place to track the status of 4400, season two. Bookmark it, or subscribe for the latest updates. Remember, the television vulture is watching your shows. Are you?

Airing on The CW television network, the 4400 TV show is a reboot of The 4400 which ran for four seasons (2004-07). This version stars Brittany Adebumola, Joseph David-Jones, Ireon Roach, TL Thompson, Jaye Ladymore, Derrick A. King, Khailah Johnson, Cory Jeacoma, Amarr, and Autumn Best. Over the last century at least 4,400 people who were overlooked, undervalued, or otherwise marginalized vanished without a trace off the face of the planet. One night, they are all returned to a location in Detroit not having aged a day and with no memory of what happened to them. As the government races to understand the phenomenon, analyze the potential threat, and contain the story, empathetic social worker Jharrel Mateo (David-Jones) and hardened community corrections officer Keisha Taylor (Roach) are among the civil servants called upon to deal with the uncanny refugees. The new partners clash in ideology and approach, but gradually find they have more in common than they thought as they become familiar with those under their care. These unwilling time travelers, collectively dubbed the 4400, must grapple with their impossible new reality, the fact that they’ve been returned with a few “upgrades”, and the increasing likelihood that they were brought back now for a reason they’re only beginning to understand.

The first season of 4400 averaged a 0.07 rating in the 18-49 demographic and 370,000 viewers in the live+same day ratings (including DVR playback through 3:00 AM). While these numbers don’t include further delayed or streaming viewing, they are a very good indicator of how a show is performing, especially when compared to others on the same channel. There can be other economic factors involved in a show’s fate, but typically the higher-rated series are renewed and the lower-rated ones are cancelled. Find out how 4400 stacks up against other CW TV shows.

Will The CW cancel or renew 4400 for season two? The network typically doesn’t depend on ratings as much as the other networks do and this show feels compatible with the rest of The CW’s programming. However, CW is up for sale so I don’t expect the network to renew as many shows as usual. I think this reboot will be renewed but its fate could go either way. I’ll update this page with breaking developments. Subscribe for free alerts on 4400 cancellation or renewal news.

What do you think? Were you hoping that the 4400 TV show would be renewed for a second season? Are you sorry that The CW cancelled this TV series, instead?

I ABSOLUTELY ENJOY THE RENEWED VERSION I REALLY HOPE THERE IS A SEASON TWO !!! THE ORIGINAL IS ABSOLUTELY AMAZING AS WELL .

I have to agree. The reason it went ahead? Because; diversity. I just finished binge watching the entire “The 4400”, then remembered I’d read it was being remade… so I downloaded and started watching this immediately after. I’m halfway through episode 3 and it’s so awful I came here to read if it gets better. We watch such things to escape real life for a while and be entertained… and this mediocre show does that in one way – in that the world apparently turned 80% black overnight. However it’s also irritating watching this, because it’s a constant reminder most… Read more »

Ok I’ve watched a couple more episodes and this show goes from bad to worse. If anyone wants the perfect example of everything wrong with shows today, just watch episode 5. TV is no longer about entertainment so you watch the adverts – it’s about alienating an audience by pushing agendas – the very reason we watch them in the first place, to ESCAPE their nonsense. I hope this show, and every show like it flops miserably so they never secure a second season, until the people holding the checkbook realise and pull their advertising until someone fires those responsible.… Read more »

Loved the original. Love this version too. The story line is great. The characters very engaging with lots of depth. Really hope they renew.

I have a copy of the original 4400, and I’ve watched it at least 12 times. Probably more. And I love this version, too.

I have enjoyed season 1. I hope to see a seasom 2. Thank you

I was a big fan of the original one. At first I was sceptical but I must admit I really liked this reboot too. Very interesting. I hope they will renew it .

Hello. I thoroughly enjoyed the series. It was innovative, intriguing with salacious characters that I wanted to see weekly. Its sad how network television programming executives dangle hit show in front of faithful patrons. Some who can afford streaming and satellite services but prefer to stay with analog television. So please keep this show on and let different series run for an extended season before you get the ratings tabulated. A lot of patrons are not media and computer savvy to to chime in order to show their support for different shows so you don’t get a fool count of… Read more »

I loved the original 4400, but gotta say I’m enjoying this rebootalso .

I want to see a season 2 of the original

I wasn’t sure about this show at first. But I am glad I stuck with it and hope it does get renewed

Is 4400 going to be cancelled simple answer please

Please let me know when 4400 season 2 is released

You mean if the show is renewed?

This is a very interesting show. I recall the original but this is so much better. I am much older than many of the demographic ages. Supernatural was almost cancelled twice. That show carried for 15 seasons. Give this show a chance.