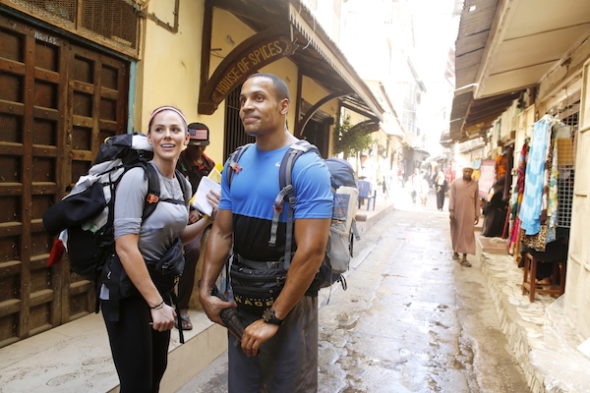 The race continues and The Amazing Race isn’t ending anytime soon. Today, it was revealed that CBS has renewed the venerable TV series for season 30.

Hosted by Phil Keoghan, the long-running reality competition series follows teams of two as they travel around the world solving clues for a prize of $1,000,000.

The Amazing Race has been a staple of CBS’ programming lineup since it debuted in 2001. However, ratings have dropped significantly since then. Season 29 is currently averaging a 0.86 rating in the 18-49 demo and 4.006 million viewers, putting it far behind the network’s highest-rated reality competition series, Survivor.

Despite lower ratings, it seems CBS isn’t ready to part with The Amazing Race just yet.

What do you think? Do you watch The Amazing Race? Are you glad it’s been renewed?

Anyone know when the new season airs??????

I keep looking online and still haven’t seen a date yet.

That’s the best news!! Definitely one of the best shows on!
Thanks

Love Amazing Race! CBS hid it in a corner last season. No wonder ratings are down. Put it back where it deserves to be.

I love amazing race. Put it on another night. There are so many stupid comedy shows, dump them and giv me amazing race

I will be so upset if they cancel the Amazing Race. It is one my favorite shows of all time. Love seeing the cultures of each country they travel too. I cannot believe Big Brother is better than the Amazing Race. It is aired almost every night and definetly not something a family can sit and watch together. I am voting to keep Amazing RAce forever!!

When, when, when, my wife and I love this show. How can we see it now. Please run it soon.

It is one of the better reality shows in the CBS lineup and is much better than Big Brother which has too many dramatics. I look forward to its airing each season. I do not think that I have missed any one of the episodes

I LOVE this show, especially when they have normal people on it. I don’t like it when they try to make them villains or have famous people on it. And I pray that they NEVER have Boston Rob and Amber on again!

I couldn’t agree more!! I have also had way too much of Boston Rob and Ambuh!

I miss the Amazing race. It is one of my favorite. I love Phil, the travel, competitions, even the stress between the competitors. I’ve seen things I never would have and the places, oh the places,. Please bring it back, Sunday night was the best.

Really missing The Amazing Race – wish CBS would air on Wed night or Sunday night again. Used to be a family thing every Sunday night after 60 min. Please don’t air on Fri night, lots of families are involved in school sports.

Amazing Race is our favorite reality T.V. show’s & should be continued!
There are lots of people (for what ever they’re reason’s) who aren’t able to travel, and see the sight’s, the world has left to offer.
Gratefully, the Amazing Race provide’s that opportunity!

Does anyone know when it will air on CBS? Have they announced a date yet?

Yes I watch the amazing race and I love the show