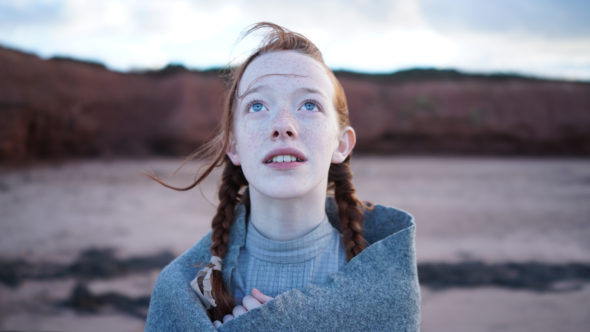 How long will we tarry with our kindred spirit? Has the Anne with an E TV show been cancelled or renewed for a third season on Netflix? The television vulture is watching all the latest TV cancellation and renewal news, so this page is the place to track the status of Anne with an E, season three. Bookmark it, or subscribe for the latest updates. Remember, the television vulture is watching your shows. Are you?

Unless they decide to publicize viewership, it is difficult to predict whether Netflix will cancel or renew Anne with an E for season three. To some extent, the show’s fate depends on its reception in Canada, where it airs on CBC. Since season two doesn’t premiere there until September 23, 2018, the global audience may have a bit of a wait for a cancellation or renewal decision. For now, I’ll keep an eye on the trades and press releases and update this page with breaking developments. Subscribe for free Anne with an E cancellation or renewal alerts.

8/15/18 update: Netflix and CBC have renewed Anne with an E for a third season. Details here.

What do you think? Are you glad that the Anne with an E TV show was renewed for season three? How would you feel if Netflix and CBC had cancelled this TV series, instead?

This show is wonderful. Covers the entire human condition. Anne is a terrific bridge between the generations. Mathew and Marilla are fabulous.

PLZ DON’T CANCEL THIS SHOW .. WAITING FOR SEASON 3 AND ADD MORE EPISODE!!! ME AND MY DAUGHTER LOVE THIS SERIES!!!

I love, love, love this show. The actors are wonderful. I have one episode left on Season 2. I hate to see it end. Please continue this enchanting series!!!

Please don’t cancel this show!!! I love it sooo much!! #annewithaneseason3!!

Please provide a Season 3! This is such a nice wholesome show with wonderfully developed characters.

Please go for season three…..love it! Great like Downton Abbey!!

This is a great wholesome show. Please continue with Season 3.

The show is wonderful! Please, please do not cancel!!! Can’t wait to see more of this beautifully produced series.

I love this show and would be beyond disappointed if there is no season 3.

I hope they renew for season three. I love this show and binge watched first and second seasons. What a beautiful story! Please keep it running ❤️

I love this show! It is clever and original. It teaches lessons of humility, kindness ,appreciation of differences in peoples and true love. I hope there are several more seasons for us to enjoy.