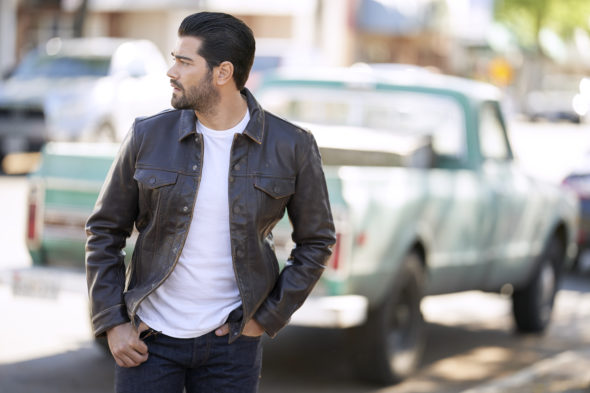 Is this the end for Abby and Trace? Has the Chesapeake Shores TV show been cancelled or renewed for a fifth season on Hallmark Channel? The television vulture is watching all the latest cancellation and renewal news, so this page is the place to track the status of Chesapeake Shores, season five. Bookmark it, or subscribe for the latest updates. Remember, the television vulture is watching your shows. Are you?

The fourth season of Chesapeake Shores averaged a 0.18 rating in the 18-49 demographic with 1.70 viewers. Compared to season three, that’s down by 15% in the demo and up by 8% in viewers. Learn how Chesapeake Shores stacks up against other Hallmark Channel TV shows.

Will Hallmark cancel or renew Chesapeake Shores for season five? There were only six episodes this year but the show remained a pretty good performer for the channel. Based on the numbers, I think it will be renewed but am unsure why there were so few episodes. Could this be an indication that Hallmark is going to end the show or, that it’s an expensive program to produce? I’ll update this page with breaking developments. Subscribe for free alerts on Chesapeake Shores cancellation or renewal news.

7/16/20 update: Chesapeake Shores has been renewed for a fifth season on Hallmark.

What do you think? Are you glad that the Chesapeake Shores TV show has been renewed for a fifth season? How would you feel if Hallmark Channel had cancelled this TV series, instead?

I really hope that this series does not just end like cedar cove did. It would really be a disappointment if hallmark just ended the series without any explanation

Brilliant show cant wait for session 5… its a must.

I absolutely LOVE this show ❤️Am getting serious withdrawal symptoms since series 4 ended! Hurry back to our screens please!!

I I have enjoyed Chesapeake Shores over the past 4 seasons + would NOT want it to be cancelled like Hallmark did to Debbie Macomber’s series. (Cedar Cove). As I have read both Sheryll Woods + Debbie Macomber’s book series, made into a Hallmark tv series, there is much more stories to be told. I was very disappointed when Hallmark shelved Cedar Cove after season 3.

I agree I loved it! I want to see more of Abbey and Trace such chemistry.

ikr, I have watched all seasons over and over again, I can recite everyone’s lines LOL

I certainly hope it isn’t cancelled. I love watching this show.

I hope not .
It a great shoe and my mum love show and dad

Yes we need a season 5

Yes we need a wholesome show like this right now!!