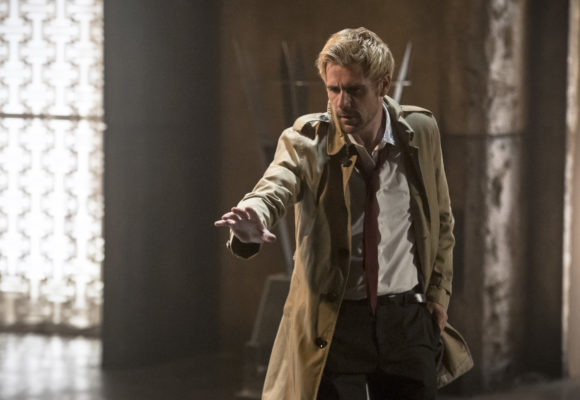 John Constantine is back and The CW’s got him. Watch a trailer, below. Although the NBC cancelled its Constantine TV show after one season of 13 episodes, back in 2015, fans haven’t forgotten DC Comics’ Hellblazer character. Now he’s back for a pair of episodes in the third season of DC’s Legends of Tomorrow TV series, and Matt Ryan is reprising the role. He’s also voicing the character in CW Seed’s upcoming, animated Constantine web series.

This isn’t the first time Ryan has returned to the role and the British warlock’s trench coat. He also appeared in the fourth season of The CW’s Arrow, as pictured above. Keep your eyes peeled for him in episode 3.10, when Legends returns from its winter hiatus in February of 2018. A CW action-adventure series, Legends of Tomorrow stars Victor Garber, Brandon Routh, Caity Lotz, Franz Drameh, Arthur Darvill, Amy Pemberton, Dominic Purcell, Wentworth Miller, Maisie Richardson-Sellers, Nick Zano, Tala Ashe, and Neal McDonough.

What do you think? Were you a Constantine fan? Do you plan to check out Matt Ryan as John Constantine in the third season of DC’s Legends of Tomorrow TV series?

Bring Back Constantine. Show Was Awesome!!!

HELLBLAZER YES, Matt Ryan aka: John Constantine should be back here on the CW for more than just 3 episodes on “DC Legends Of Tomorrow” during the 3rd Season He should be back in the Arrowverse permanently like appear on “Arrow, The Flash, and Supergirl” but most of all bring back the Television Series/Television Show on the CW of “Constantine” because it should of never ever been cancelled on NBC there’s My opinion and My input/advice!

Me and my son, then 24 when NBC canceled Constantine. I wish we’d known he’d been on episodes of Legend of tomorrow, but would much rather see it a full-blown, full-time series again on SyFy, Netflix, or Hulu, he CW Fox, etc.

Why don’t they just bring back Constantine? The show was great. To have Constantine on a couple of episodes legends of tomorrow is ridiculous. That’s just to boost the ratings of a show Thats not as good as Constantine. Makes no sense!!!!

Was jumping up and down thinking CW was bringing back the show. Still hoping. 🙂

Yes, I loved Constantine and I was upset when they cancelled it. Just wish the CW would’ve just been able to pick it up where it left off , instead of doing an animated version. At least they didn’t give up entirely on it , the way NBC did.

Unfortunately, I’m not big on idea of animated version and not sure I’d watch it as an animated version it just wouldn’t have the same impact for me, a voice just isn’t the same as the visual of the real-life characters so desperately hope some network will pick up and bring back the real show

Yes I love Constantine was upset when they cancelled it on NBC. So glad he Is returning.

I do have a bone to pick with NBC Network for letting “Constantine” Television Series go only 1 Season because He has a cult following and NBC should of had some more faith in the Show also in the Fans? Matt Ryan playing John Constantine was a brilliant choice for the Television Series back in 2015, but see now the CW Network has grabbed Matt plus His “Hellblazer” Character to join the DC Universe Television Shows was absolutely completely definitely positively totally mind blowing genius of an idea! Seeing Him on the 4th Season of Arrow super fantastic and now… Read more »

I was a Constantine fan, and upset it only lasted 1 season.

I’m glad to hear that Ryan will be making an appearance on a superhero show I like—Legends of Tomorrow is actually both pretty funny and a fun show to watch. I wish they’d just make him a regular on the series, since he’s pretty much the definite Constantine anyway. It sucked when that show got canceled, but at least it was allowed to actually finish its run—I’ve seen shows that wern’t even allowed to do that. Good news to hear,though.