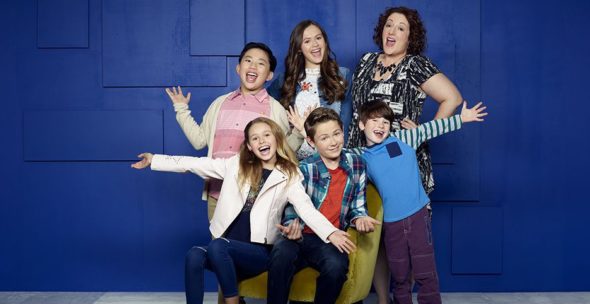 TV show description:
From creators Boyce Bugliari and Jamie McLaughlin, the Coop & Cami Ask the World TV show is a live-action comedy for children and families. The series centers on middle-school aged brother and sister Cooper (Lotus) and Cameron (Turner) Wrather, who co-host a web series.

On their show, Would You Wrather, the siblings introduce unusual questions and results to their millions of followers, who go by the fandom name of Wratherheads. Together with their fans, Coop and Cami work to solve the problems of life, from the serious to silly.

They’re not on their own though. Their little brother, Ollie (Booth), and Coop’s best friend, Fred (Tsai), are always on hand to help, no matter how hectic things get in the Wrather homestead. The family also includes big sister Charlotte (Sanabia), and their mother Jenna Wrather (Metz). No matter the questions or results at hand, Coop and Cami do their best to address everyday issues with humor and heart.

What do you think? Do you like the Coop & Cami Ask the World TV series? Should this Disney Channel TV show be cancelled or renewed for another season?

If you want to renew coop and cami season 3, you can sign this petition https://www.change.org/p/the-walt-disney-company-renew-coop-and-cami-ask-the-world-for-season-3. If we reach 400 signatures, the petition will be mailed to disney.

Please renew Coop and Cami for season3! We love the show. My whole family watches it.

I would love to see the show renewed for season 3. I liked season 1 and all of the cast, but season 2 much improved in my opinion. The story lines continued to improve and if they get a season 3 they could go so much deeper. I never understood why Disney would order an additional 10 episodes in season 2 if they were bent on cancelling the series, and then of course the COVID thing cut those short by 3 episodes.

Coop and Cami has to be renewed for season 3. It wouldn’t be fair to the cast who were torn apart from each other without closure since Covid-19 resulted in their season being cut short and they expected another at that.

Please renewed season 3 of coop and Cami. My kids and I enjoyed watching this show. It’s different from the rest of the show. I think is kind of cool and asking questions. Please renewed

How many and what Can see season two

Are they going to come back for the end of season 2. Please bring back and renew for season 3. Love watching this show with my son. We think it’s hilarious!

yeah it comes back tomorrow

My daughter and I love sitting down together and laughing our butts off .

Please renew coop and cami for season 3.it awesome to watch. My kids, nieces and nephews love this show it’s different and amazing. Cami and copper is awesome and so is all the cast members