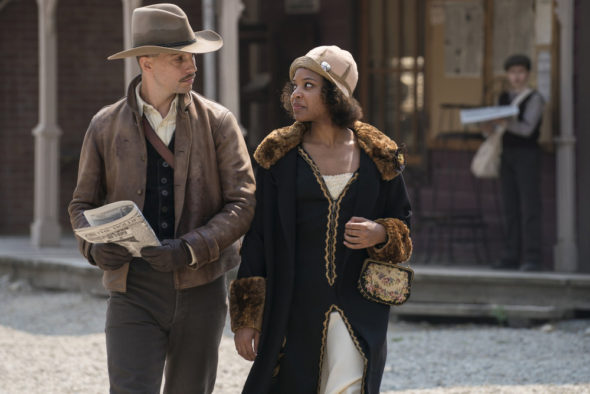 Is the first season of the Damnation TV show on USA Network heavenly, hellish, or stuck in limbo? As we all know, the Nielsen ratings typically play a big role in determining whether a TV show like Damnation is cancelled or renewed for season two. Unfortunately, most of us do not live in Nielsen households. Because many viewers feel frustration when their viewing habits and opinions aren’t considered, we’d like to offer you the chance to rate all the Damnation season one episodes here.

A USA 1930s period drama, Damnation stars Killian Scott, Logan Marshall-Green, Sarah Jones, Chasten Harmon, Melinda Page Hamilton, Christopher Heyerdahl, Joe Adler, Teach Grant, Dan Donohue, David Haysom, Arnold Pinnock, and Rohan Mead. The heartland labor drama centers on Seth Davenport (Scott). Although he poses as a small town Iowa preacher, he is actually an incognito labor agitator. Seth’s goal is to incite an all out revolt against the status quo. Little does he know a captain of industry has hired professional strikebreaker Creeley Turner (Marshall-Green) to squash the insurrection at any cost. What’s more, Davenport and Turner have a history — one that’s dark and bloody.

What do you think? Which season one episodes of the Damnation TV series do you rate as laudable, damnable, or somewhere between? Should USA have renewed Damnation for a second season? Don’t forget to vote, and share your thoughts, below.

I loved Damnation and I want it to continue. This is one of my favorite shows. We have too much crap on TV these days.

This show being cancelled was ridiculous! I’ve had maybe a handful of shows that I watched weekly and this was one of them. The others Game of thrones,Dexter ,Peaky Blinders and Sopranos all but 1 are cancelled and or on the last season. Damnation was my new favorite show bring it back!! The cast is amazing and I love the characters

Fantastic show! I hope a network or netflux picks it up for a couple more seasons. The cast was magnificent Ave storyline too!

I sure hope stone network or Netflix picks up the show! I loved it!

We loved it, and hope this helps bring it back!

Truly enjoyed this show. Whatever lame brain decided to cancel it should be tied to a chair and made to watch those Crudedashians until their last breath. Can’t understand what the attraction is for cheap “reality” shows while quality scripted dramas are cancelled. People would rather watch garbage than a show that would cause their brains to actually think and follow inter-action and conversation between actors. Please, someone who is over 25 and has brain cells that are functioning, devise a plan to bring this program back.

Great show, watched every episode! Very very upset that there’s not a second season! Bring it back

If it had been released in the USA on Netflix when it was released in the rest of the world, with proper promotion, this would have done really well. Such a shame. Seems like sabotage to me. Instead we see ridiculous reality tv shows and such. 9/10 people I’ve told to watch the show love it. Clearly promotion was an issue. Poor promo by USA Network and Netflix.

Love this show – hoping another network will pick it up!

Me & my Husband Loved the show. Instead of All these Fake Reality Shows, this was a show that had Real Meaning. The Real Struggles of people!!!

Fantastic show. One of the best things USA has ever done!

We loved Damnation and were sorry to see it cancelled.

Put it back on! Some really awful shows get to have 10 seasons. This one is by far better then most!

Such a dreadful shame this quality show was cancelled!