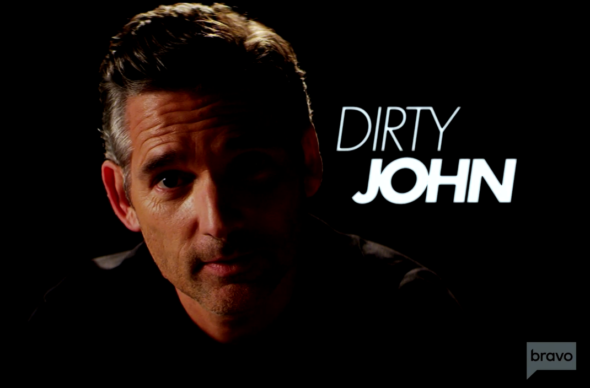 “He is not a perfect person, but he loves me.” Bravo has just announced the premiere date for their new TV show, Dirty John.

Based on the Los Angeles Times article and podcast, Dirty John centers on “‘Dirty’ John Meehan, his relationship with Debra Newell and his exploits. The series will tell the story of how Newell’s romance with Meehan spiraled into secrets, deception, denial and, ultimately, survival — with shocking ramifications for not just her, but her children.” The cast includes Connie Britton, Juno Temple, Eric Bana, Jean Smart, and Julia Garner.

Debra Newell has a seemingly perfect life: she’s successful, beautiful and lives in one of California’s most desirable coastal cities, Newport Beach. The only thing missing is love. So when she finally meets charming and handsome doctor John Meehan, she’s quickly swept into a whirlwind romance, much to the dismay of her daughters Terra (Julia Garner) and Veronica (Juno Temple). Their fast-tracked relationship creates tension between Debra and the girls, leaving them no choice but to investigate the stranger who has swept their mother off her feet. And with a fraught family history, the backstory of Debra and her mother Arlane (Jean Smart) provides insight into why she may have been so vulnerable to John in the first place. As Debra gets drawn deeper into his lies and sinister game of psychological manipulation, it results in horrific consequences for an entire family.

The anthology series, “Dirty John,” received a two season, straight to series order from Bravo Media. The second season will be a based on an all-new story. Cunningham and Reiner both serve as executive producers along with Richard Suckle and Charles Roven for Atlas Entertainment; Mark Herzog, Christopher G. Cowen and Chris Argentieri for Los Angeles Times Studios; and series stars Connie Britton and Eric Bana.

Early next year, sister network Oxygen Media will air a companion documentary “Dirty John, The Dirty Truth” produced by Herzog & Co and Los Angeles Times Studios. The special delves into the life of John Meehan through the eyes of the real people he deceived and traces his trail of deceit that started long before he met Debra Newell.

For more information on the show, please visit: Bravotv.com/dirty-john. Fans can check out the official Facebook page @DirtyJohnBravo, Instagram handle at @DirtyJohnBravoand join the conversation on Twitter @BravoTV using the hashtag #DirtyJohn.”

What do you think? Are you a fan of thrillers? Will you watch Dirty John?