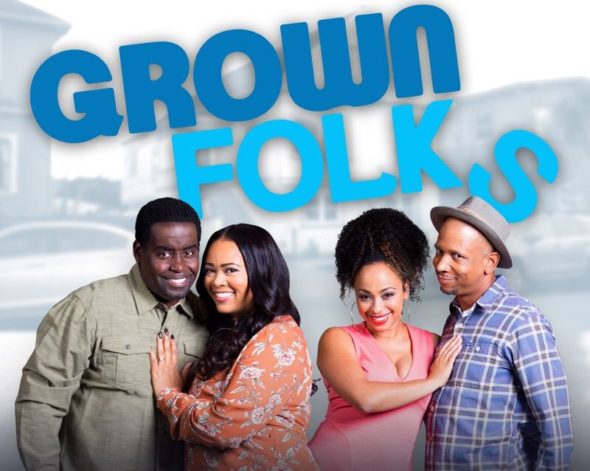 Thrifty and a tad touchy, Gary Thompson (Johnson) is married to the calm, cool, and collected Jillian (Jones). The Thompsons share a duplex with James (Phillips) and Brenda (Ward) Finley.

Brenda is a happy homemaker. She is well-matched with James, who — unlike Gary — tends to be sociable and self-effacing. Despite their differences, these two couples look out for one another as they muddle through this thing called life.

What do you think? Do you like the Grown Folks TV series? Should this Bounce TV show be cancelled or renewed for another season?

The show should be renewed it’s very funny and I like the cast .

I watched the show a couple of times at first I wasn’t sure but I actually like it and it is funny. Please renew.

I really enjoy this show. I would like to see the show renewed.

The comedy is refreshing and the couples are believable unlike some on TV nowadays.
Brian McKnight did a great job in his guest appearance… #RenewASAP

please do NOT cancel this show. it is nice & it must be renewed once it has its season finale

Grown Folks is HORRIBLE! The dad is THE ONLY funny person on the show. Recast, leave him in and find some people that’ll compliment his character! His wife looks WAY FRUMPY is those “made to order” clothes — cutting up a sweatshirt made to fit her hips — BAD CHOICE! She NEEDS to loose some weight and get her sexy back. stomp always playing the disgruntled wife, always fussing for something. #overit As fr as the other couple, the wife needs to change her voice – she sounds stupid. The guy needs some molding on his character.

I enjoyed the show