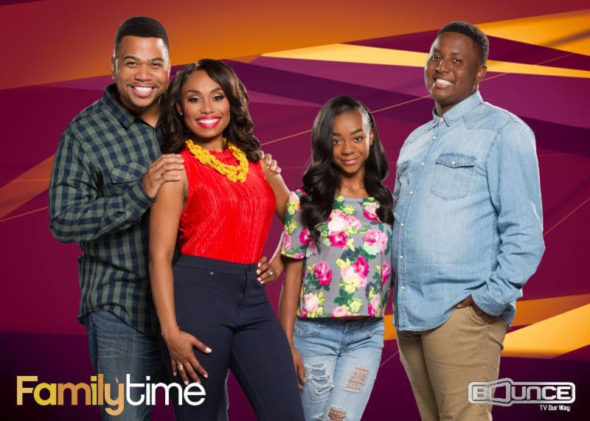 TV show description:
A family sitcom, the Family Time TV show was created by Bentley Kyle Evans. When working class couple, Tony (Gooding) and Lisa (Conwell) Stallworth, hit the lottery, the winnings propel these former high school sweethearts into the middle class. Tony and Lisa decide to use the windfall to move to the suburbs with their children, Devin (Evans) and Ebony (Calhoun).

Despite the payday, Tony is still a struggling general contractor. While he and Lisa love each other, they are inclined to quarrel. Still, their squabbles don’t keep them from keeping an eye on their impish kids. From their romantic lives to school performance and future aspirations, Tony and Lisa stay atop of what’s going on in Devin and Ebony’s lives. These parents are determined their kids will make choices now which will serve them in the future.

What do you think? Do you like the Family Time TV series? Should this TV show be cancelled or renewed for another season on Bounce TV?

I love the show. Please let it keep goiing

I am looking forward to the new season of Family Time. I enjoy the show & the cast a lot.

Family Time is one of the only sitcoms that reflect on just good old fashion TV comedy. And also to mention that it is black comedy. Something that is missing on other channels. Please renew this show. We need this. It is one of the only family shows in a positive light.

Family Time is one of the only sitcoms that reflect on just good old fashion TV comedy. And also to mention that it is black comedy. Something that is missing on other channels. Please renew this show. We need this. I is family show in a positive light.

This show should not be canceled because it is one of the few black sitcoms. “Family Time ” us funny and modern. Keep it coming like “In the Cut”!

It is now 11:01 pm in Alabama and my family and I just finished binge watching the entire set from season 1 to the last episode when they walked Ebony and Devyn out for college and she comes back n to get her bear and gives the home a last look over and wouldn’t you know my wife and my sons all shed tears,yes I was misty eyed myself . It took us a full week to complete it.That is the some of the best raising and guidance of young black children in a successful home to see them through… Read more »

We need more family shows like this. The show family times just really getting started. Please keep it going and don’t cancel the show
Thanks

I love Family Time and I believe the show was just hitting its stride! Please, please, please do not cancel this show. I’m from Philly and I know that in my area it’s a very popular show.