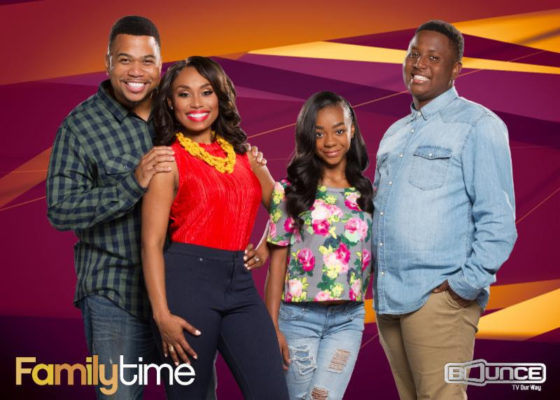 The Stallworths are back for more laughs. Today, Bounce announced season six of Family Time will premiere in October.

The sitcom “follows the lives of the Stallworth family who relocated to the suburbs after hitting the lottery.” The cast includes Omar Gooding, Angell Conwell, Bentley Kyle Evans, Jr., Jayla Calhoun, Clayton Thomas, and Tanjareen Thomas.

ATLANTA, Sept. 26, 2018 — The Stallworth family is back this fall and ready for an all-new season of Family Time. Season six of Bounce’s hit comedy world premieres Monday, October 1st at 9/8c.

New season six episodes of Family Time will debut on Bounce Monday nights this fall and will also be available on Tuesdays on the popular subscription video-on-demand service Brown Sugar, along with complete seasons one through five.

Family Time follows the lives of the Stallworth family who relocated to the suburbs after hitting the lottery. High school sweethearts Tony (Omar Gooding) and Lisa (Angell Conwell) wrangle each other and their mischievous children, Devin and Ebony, as they make up their own rules for love, marriage and family along the way. Bentley Kyle Evans, Jr., Jayla Calhoun, Clayton Thomas and Tanjareen Thomas guest star.

The season starts off with a bang with guest appearances from T.C. Carson, Towanda Braxton, Eric Roberts, Robert Ri’chard and more. Viewers will laugh along this season as the Stallworth family tackles one child leaving the nest and another growing up way too fast, rekindling romances and discovering the family’s ancestry. No matter what comes their way, one thing we know is the Stallworth family is here to stay!

Bounce (@BounceTV) airs on the broadcast signals of local television stations and corresponding cable carriage and features a programming mix of original and off-network series, theatrical motion pictures, specials, live sports and more. Bounce has grown to be available in more than 109 million homes across the United States and 97% of all African-American (AA) television homes. Visit BounceTV.com for more information.

What do you think? Do you watch Family Time? Are you excited for the new season?